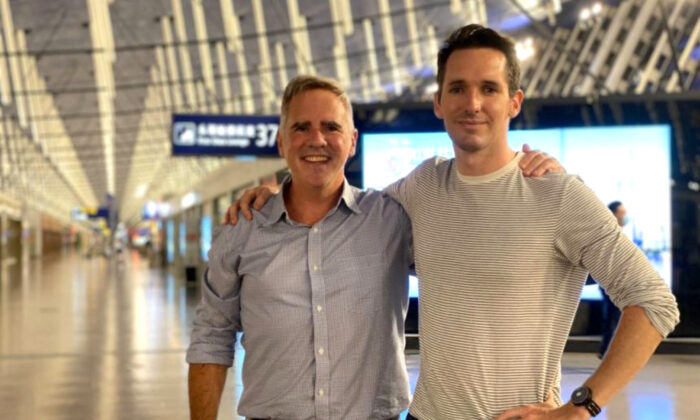 The Australian Broadcasting Corporation (ABC) and the Australian Financial Review (AFR) have pulled two correspondents out of China after a diplomatic stand-off between communist authorities left the journalists sheltering at diplomatic missions until they could be evacuated.

The journalists, Bill Birtles from the ABC and Mike Smith from the AFR, arrived back in Australia on Tuesday morning after spending five days under the protection of consular staff after Chinese officials banned them from leaving the country, Reuters reported.

Chinese regime officials knocked on the doors of both Birtles, who was stationed in Beijing, and Smith who was stationed in Shanghai, after midnight on Wednesday last week telling them to submit for questioning about detained Australian Chinese television anchor Cheng Lei.

Australia’s Foreign Minister Marise Payne confirmed the news in a media statement: “The Australian embassy in Beijing and Consulate-General in Shanghai engaged with Chinese authorities to ensure both journalists’ wellbeing and return to Australia.”

“Those Australians have now arrived in Australia,” Payne said.

Birtles and Smith were only allowed to leave China after they submitted to separate one-hour interrogations by China’s secretive spy agency, the Ministry of State Security.

Birtles, who was told he was being questioned about a national security case, noted he was not asked once by officials from the Ministry of State Security about his reporting.

However, Chinese authorities acted before Birtles could get out of the country.

Upon arriving back in Australia, Birtles told the ABC it had been a whirlwind, saying: “It’s a relief to be back in a country with a genuine rule of law.”

That said, he did note that it was disappointing to have had to leave under the circumstances.

Mike Smith told the AFR on Tuesday that he was happy to be home after the five-day ordeal, which included communist officials entering his residence at 12:30 a.m. on Thursday morning last week to question him.

“The late-night visit by police at my home was intimidating and unnecessary and highlights the pressure all foreign journalists are under in China right now,” said Smith.

AFR editor-in-chief Michael Stutchbury and editor Paul Bailey said in a statement: “We are glad Mike Smith, our correspondent who has been based in Shanghai for two and a half years, and Bill Birtles from the ABC, have made a safe return to Australia this morning.”

“This incident targeting two journalists, who were going about their normal reporting duties, is both regrettable and disturbing and is not in the interests of a co-operative relationship between Australia and China,” they wrote.

ABC News Director Gaven Morris said in a media statement on Tuesday that they had brought Birtles home because of advice from the Australian government but noted they aimed to return staff to China as soon as possible.

“The story of China, its relationship with Australia and its role in our region and in the world is one of great importance for all Australians, and we want to continue having our people on the ground to cover it,” said Morris.