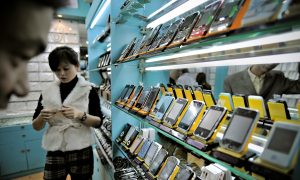 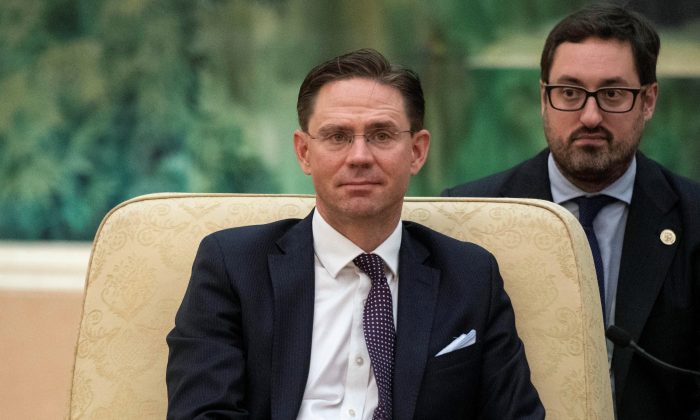 European Commission Vice President Jyrki Katainen listens to China's Premier Li Keqiang (not pictured) during a meeting at the Great Hall of the People in Beijing on June 25, 2018. (Fred Dufour/Pool via Reuters)
China Business & Economy

BRUSSELS—The European Commission set out a 10-point plan on March 12 for more balanced economic relations with China, urging EU leaders to back its ideas to curb Chinese state-owned enterprises and increase their guard against cybersecurity threats.

The action plan marks a shift in the bloc’s stance toward its top trading partner and will be put to EU leaders to discuss at their next regular summit meeting in Brussels on March 21-22—before an EU-China summit on April 9.

The Commission, the EU’s executive, said the European Union should cooperate more with China in areas such as climate change and peace, but should also push for a more reciprocal economic relationship and take steps to protect its industry.

The European Union shares many of the United States’ concerns over Chinese market distortions, overcapacity and technology transfer. But it has avoided taking sides in a multi-billion dollar trade war between Washington and Beijing.

Europe has also been increasingly frustrated by what it sees as the slowness of China’s opening of its economy, a surge of Chinese takeovers in critical EU sectors and U.S. pressure to shun China, and notably telecoms equipment maker Huawei over espionage concerns.

A German EU diplomat described the paper as a “comprehensive and courageous” stocktaking of relations with Beijing, highlighting a lack of reciprocity and growing protectionism and also broaching difficult issues, such as human rights.

If backed by EU leaders, the European Union would urge China to agree to reforms of World Trade Organization rules, notably regarding subsidies and forced technology transfer, and conclude a deal with the EU on investment rules by 2020.

The Commission urged EU nations to revive a stalled proposal known as the International Procurement Instrument that would require foreign countries to open up their public tenders in return for access to Europe.

The EU executive believes Chinese bidders for EU public contracts should meet high labor and environmental standards and wants to adapt EU law to limit the state-owned enterprises and state subsidies in the EU market.

It also believes EU countries should find a common line on the security of planned high-speed 5G telecoms networks.

China is the EU’s biggest source of imports and its second-biggest export market after the United States, with trade between the two worth more than $1 billion per day. China’s trade surplus in goods with the European Union was 177.7 billion euros ($200.4 billion) in 2017.