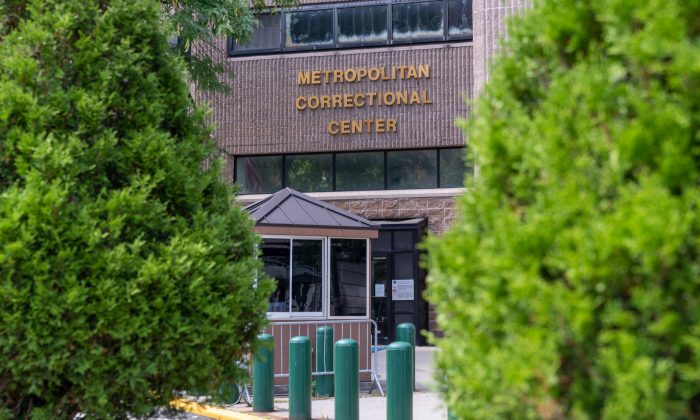 The Metropolitan Correctional Facility, where Jeffrey Epstein was found dead in his jail cell, is seen in New York City on Aug. 10, 2019. (David Dee Delgado/Getty Images)
By Bowen Xiao

The guards assigned to check on the cell of convicted sex offender Jeffrey Epstein were working “extreme overtime shifts” in order to make up for staffing shortages on the morning of the late financier’s “apparent suicide.” There is also reportedly no surveillance video of Epstein’s death.

A person familiar with the jail’s operations told The Associated Press that the Metropolitan Correctional Center’s Special Housing Unit—where Epstein was being held—was staffed with one guard who had worked a fifth straight day of overtime.

Another guard was also forced to work mandatory overtime, according to the person, who spoke on the condition of anonymity since they aren’t authorized to discuss jail operations publicly.

The staff at the facility also failed to follow protocols on the day of Epstein’s Aug. 10 death, while in custody.

A source who wasn’t authorized to speak on the record told Reuters that Epstein was apparently found “hanging by his neck.”

The person also said that at the facility, two jail guards are required to check on all inmates every 30 minutes. But the “procedure was not followed overnight,” on the night before his death, according to the source.

Every 15 minutes, guards also are required to make “another check on prisoners who are on suicide watch.”

Attorney General William Barr, while speaking at an event in New Orleans on Aug. 12, said that there were “serious irregularities” at the facility that are “deeply concerning.” Barr previously said that both the FBI and the Department of Justice’s inspector general were opening investigations into Epstein’s death.

On July 24, Epstein was reportedly found injured and semi-conscious in his prison cell, with marks on his neck. It remains unknown whether the incident was a suicide attempt or an assault by another inmate.

According to CBS News, Epstein was put on suicide watch after the reported injuries “as a precautionary measure.”

Epstein was apparently taken off suicide watch in late July at the request of his attorneys, unidentified sources told The Wall Street Journal. The financier had been meeting with his lawyers for up to 12 hours a day, one of those people told the newspaper.

Law enforcement officials told The New York Post on Aug. 11 that there is no surveillance footage of the apparent suicide.

Cameras located in the Metropolitan Correctional Center’s 9 South Wing, the area where Epstein was housed, are pointed at areas outside the cells and not inside, unidentified people familiar with the setup told the newspaper.

According to court documents, Epstein sexually exploited and abused dozens of minor girls at his homes in New York City and in Palm Beach, Florida, among other locations.