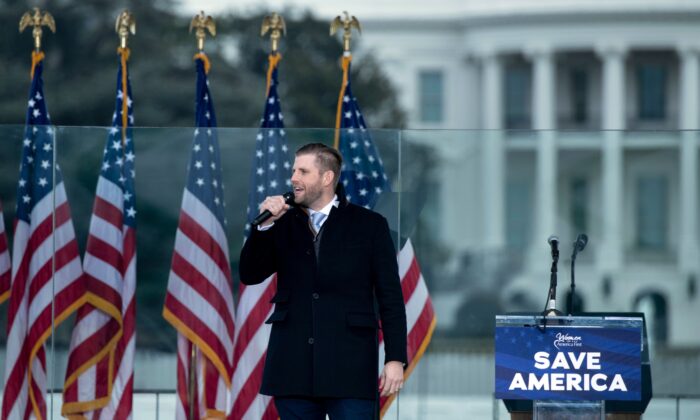 Eric Trump speaks during a rally of supporters of then-U.S. President Donald Trump on The Ellipse outside of the White House in Washington on Jan. 6, 2021. (Brendan Smialowski/AFP via Getty Images)
FBI Raids Trump Resort

He was referring to comments made by White House press secretary Karine Jean-Pierre on Aug. 9, when she said President Joe Biden “was not briefed” and “was not aware of” the FBI raid. She also said, “No one at the White House was given a heads up.”

“This is a political hit on my father,” Eric Trump continued. “They know Biden is floundering in the polls; he’s doing absolutely horrible. And so what do they do? They put on a stunt like this.”

The younger Trump said his father has been spending the summer in New Jersey so the former president wasn’t at his Florida resort when the FBI showed up on Aug. 8.

“They raid his home when he hasn’t been there for three months,” he said. “They want to embarrass him. They send 30 agents.”

The FBI raid has drawn outcry among Republicans, with some also making comparisons to other countries.

“America cannot go down the path of countries like Cuba & Nicaragua that turn government agencies into weapons for those in power,” Salazar wrote on Twitter.

Carmen Maria Montiel, the GOP nominee for Texas’s 18h Congressional District race in November, warned that “America is the next Venezuela.”

“What happened to President Trump today is an example of what happens in a socialist controlled government,” Montiel wrote on Twitter. “I know it because I am from Venezuela.”

The younger Trump said the FBI raid was a “coordinated attack” against his father, who did a “phenomenal job” while being the president.

However, he said the attack is “absolutely” going to backfire.

“This country is more [expletive] than I’ve ever seen because they don’t like these antics,” he said. “They know if it can happen to a billionaire who was former president who got out of office two years ago, what they could do to the average American and their family, they could destroy them.”

The FBI raid has significantly boosted voter enthusiasm among voters who identified themselves as either Republican or Independent. According to a poll (pdf) conducted by the Trafalgar Group in partnership with the Convention of States Action on Aug. 9 and Aug. 10, 83.3 percent of GOP voters, and 71.7 percent of Independents, said the raid has made them more motivated to vote in November.

Among Independent voters, the poll also found that 53.9 percent said they believe Trump’s political enemies are behind the raid, with 35.3 percent believing it was the impartial justice system, and 10.8 percent saying they are not sure.

“Rather than being focused on China, who’s ripping off America every single day, rather than being focused on the threats that plague this country, terrorism that wants to come in here, al-Qaeda … the Taliban … extremists who want to destroy our way of life, the FBI, because of Joe Biden and because of this incompetent administration, has weaponized the system to go after their political rivals,” Eric Trump said.

“That’s their priority versus keeping this country safe,” he added.