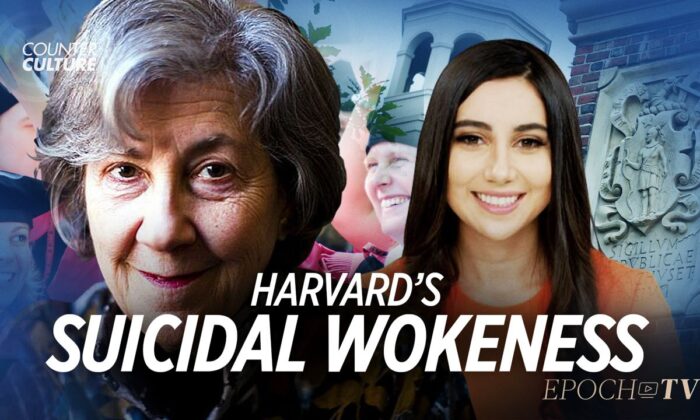 Watch a discussion on changes at Harvard University and an interview with Ruth Wisse as she recounts her experiences with the topic on EpochTV's Counterculture program. (The Epoch Times)
EpochTV Reviews

This episode of Counterculture explores how the academic institution of Harvard is changing and why. Host Danielle D’Souza Gill begins by attributing the change to “mass formation psychosis,” a term used to explain how so many people could so eagerly listen to and follow someone like Nazi dictator Adolf Hitler. History is full of other examples of dictators and cult leaders who are able to control and brainwash people with their charismatic personalities and propaganda, regardless of how irrational their ideas or policies may be. Being able to identify mass formation psychosis as it occurs is imperative to prevent horrifying events, like the Holocaust, from being repeated. A key factor in recognizing the signs is first admitting that this phenomenon exists, and that no one is completely immune from it.

Psychologist and former Nazi prisoner Joost Merloo identified common traits of people who are able to resist this type of mass psychosis:

Merloo wrote a book, published in the 1950s, about mental control and manipulation. There have been podcasts and other publications on the subject that have quickly been censored by sites such as YouTube and Yahoo. Mrs. Gill points out that this makes it obvious that the left does not nurture the principles that prevent mind control but instead published articles citing two supposed experts that totally reject the idea of mass formation psychosis. Of course, the body of evidence proves so clearly that the situation does exist.

In the next segment of the video, the host turns the spotlight on Harvard, which has become what she calls a “breeding ground” for mass formation psychosis.

She welcomes guest, Ruth Wisse, Professor Emerita of Yiddish literature and Professor of comparative literature. Ms Wisse also focuses on Jewish history and culture. She and her family escaped from the regimes of both Hitler and Stalin, and she is the author of “Free As a Jew,” a personal memoir of the national self-liberation of the Jews.

Ms. Wisse talks about how her family fled Europe and went to Canada when she was a child. She remembers feeling very secure where they lived but stayed aware of what was going on in the country they just left. She wrote the book from a cultural perspective to show what was happening in the cultures of the countries from which they escaped and the one that offered them refuge. In Canada, there were no public schools, only Protestant and Catholic schools. By law at the time, it was determined that Jewish children would attend the Protestant schools. This prompted the Jewish citizens to build their own schools since they were neither Protestant or Catholic and needed schools for their own ethnicity and beliefs, which is where Ms. Wisse was educated.

In 1993, Harvard opened a chair for Yiddish Literature, and invited Ms. Wisse to teach there. She talks about how she watched the institution start to decline when affirmative action was introduced. No one was monitoring ideological and political compliance and the university continued its decline over the next 21 years according to what Ms. Wisse experienced. Instead of basing academics on an individual’s merit, it was based on the group in which the person was  placed: privileged or non-privileged. She recognized that this was against the progress that had been made during the Civil Rights Movement, and she expressed her opinion that this would contribute to the decline of the university and a standard of objectivity to strive for. By making the playing field not level, you change the culture and dynamics of the institution.

Ms. Wisse also recounts an experience she had wen a student in one of her classes on Jewish literature complained that one of the books on the reading list was racist. He requested that he be allowed to finish the class without having to read that particular book. He was allowed to do so. She found this very disturbing and a dangerous precedent set in that situation. Another example was when Lawrence Summers, Clinton’s former Secretary of the Treasury, who is Jewish, became President of Harvard in 2001 and became the target of Anti-Semitic groups and others for a speech he gave in which he called out these groups saying, “serious and thoughtful people are advocating and taking actions that are anti-Semitic in their effect if not their intent.” He was attacked and accused of being against free speech. The administration went against him, and voted him out. Ms. Wisse said that was the beginning of a change for the worse at Harvard. Many students came to her with similar situations asking for advice on how to fight back. Those who didn’t know how to fight back unfortunately become easy targets.

Ms. Wisse and some other Jewish professors were attacked as well. Ms. Wisse made a statement that anyone who stands against the legitimacy of the state of Israel is Anti-Semitic. They were also accused of trying to stifle free speech. Mrs. Gill then asks her guest how she felt about Lawrence Summers being voted out of Harvard. Ms. Wisse says she was disappointed and she wished he had fought harder but did not seem to know how to do so. This was another disturbing example of how the culture of Harvard was changing, and not for the better.

There is however a glimmer of hope. Ms. Wisse says that there are more people aware of the Anti-Semitic activity and are fighting it than when it first began. There are organizations that try to help those who stand against this type of propaganda.

In the next segment of the video, the host asks her guest about the processes that Harvard employs to get professors and to give them tenure. Ms. Wisse explains that Harvard had a policy that you had to be the best in the world in your field to get tenure. There were three main areas that had to be proven which were: being a good scholar, would be a good teacher, and would make a good colleague. The criteria began to change and were replaced with affirmative action not only in the admission of students but also in the hiring and promotion of professors. This went as far as to question the efficacy of teaching based on gender. The hiring committee had to prove that they had interviewed a certain number of women and people identified as disadvantaged before they could choose a candidate. Instead of hiring or promoting based on individual merit, decisions were made based on gender, other stereotypes, and even age. This phenomenon is what contributed most to the change of culture at Harvard. The host asks if Ms. Wisse thinks that this could be undone, and instead have things done in the correct way again at the university. Ms. Wisse advises that the only way to achieve this would be to send out a call for a conservative student revolution. This was done in the 1960’s when students began to understand that these institutions were vulnerable. Today, a revolution needs to happen again, with students making demands for the types of teaching with objectivity and principles that are needed for a positive change. It is the job of our academic institutions to teach democracy and teach it well enough that future generations maintain it. Ms. Wisse advises the host that it must start with the students. They need to demand that administrators hire good quality professors who teach truth and equality based on individual merit.

The interview concludes with the host asking Ms. Wisse to provide her opinion on some of the greatest works of Jewish literature and what they have in common. The guest has written a book which addresses this titled, “The Modern Jewish Canon,” and was based on the course that she taught on Jewish literature at Harvard. Some of the authors mentioned in her book include: Kafka, Wiesel, Ozick, and Babel to name a few. Ms. Wisse says there are things the authors have in common. One is that they wrote in many languages, and many were Nobel Prize winners. She made sure that she included writers that spoke different languages to show that people of different nationalities have a lot to contribute, and a great writer must showcase his or her particular tool which is primarily the language that he or she speaks. She states that there are many wonderful Jewish novels that are made great by the very differences that still connect these authors, and she was very glad to have the chance to teach this as a core subject to her Harvard students.