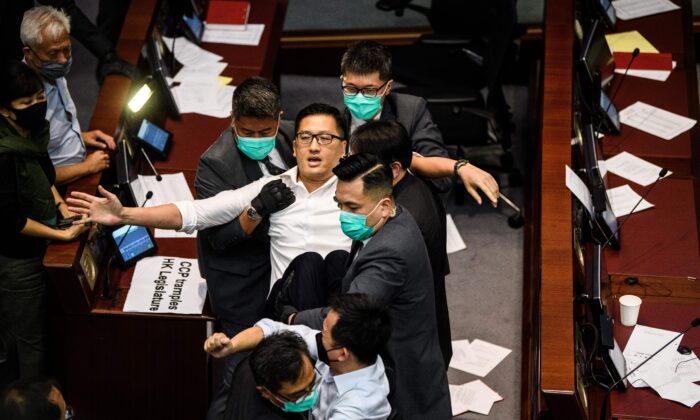 Pan-democratic politician, Lam Cheuk-ting (C) is removed by security after throwing papers torn from the Legco rulebook during a scuffle between pro-democracy and pro-Beijing lawmakers at the House Committee's election of chairpersons, at the Legislative Council in Hong Kong on May 18, 2020. (Anthony Wallace/AFP via Getty Images)
Hong Kong

End of the United Front

The Hong Kong national security law (NSL) gives impetus to “laam chau” (also called “burnism”), which means mutually assured destruction, a term first used by the radical protesters in the anti-extradition movement to describe their ideal means of checking the government. That is, any harm done to Hong Kong also harms mainland China, a strategy that many deem is being paradoxically materialized by the government itself under the draconian NSL.

Laam chau is a saying of the Hongkongers. How might it be understood in the Chinese communist culture? Last week I had tea with some friends and we talked about this. We agreed that one possibility is the “end of the united front.”

The united front is one of the three “magic weapons” of the Chinese Communist Party (CCP), along with armed struggle and party building. It is not familiar to the people in this ex-British colony, and agents of the communists in this city tend to be shy about discussing it. I can still remember that on an educational tour to mainland China, a man from the pro-Beijing Hong Kong Federation of Education vaguely referred to the united front as “cooperation with all sectors.”

The communists stress that “revolution is not entertaining guests,” and one can be certain that the united front is not a matter of being polite and gentle. Mao Zedong said explicitly that the united front is by nature a “class policy;” thus, uniting with whom and how to unite have to be based on class analysis. According to Mao, during the Republican period, China was a society with two small ends, that is, the proletariat was the CCP’s real ally and landlords and big bourgeoisie were its real enemies—both were minorities.

Those in the middle, namely peasants, urban petty bourgeoisie, and other middle classes, constituted the majority; they had dual characters, hence the first characteristic of the united front was to make use of the positive side of such characters to serve the interests of the CCP. For example, during the Republican period, the bourgeoisie was revolutionary but prone to conciliation with the regime, and so the CCP could make use of its revolutionary side to unite with it. After the founding of the PRC, the bourgeoisie needed to yield to the CCP’s demand for “socialist transformation” if they still wanted to exploit the working class for profits and survive as allies of the regime.

From the above one can infer the second characteristic of the united front—its targets are not the CCP’s real allies. In principle, they are enemies that eventually have to be eliminated, and at a certain time in history, the CCP has to deal with a major enemy; so any temporary alliance is deemed beneficial.

With the major enemy gone, the CCP needs to find a new enemy, and the old ally may need to change from friend to foe. Besides the bourgeoisie, this “friend to foe” transformation also happened to those residing in the countryside. At the Jinggangshan base in the early 1930s, Mao initially implemented a moderate policy of “relying on the poor peasants, uniting with the middle peasants, and restricting the rich peasants,” but when the internationalists came to the fore, many rich peasants were reclassified as landlords and middle peasants as rich peasants, causing unnecessary suffering. Given the fluidity of class labels, some joke that in China, in the age of “politics in command,” only serfs can really be politically safe and attract no struggle.

Well-known examples of the united front include the anti-Japanese united front  of the 1930s and the still functioning political consultative conference (CPPCC). In fact, “one country two systems” is also meant to be a united front, as the design, according to the CCP, is an alliance and cooperation between two fundamentally different social systems. Under the perceived common goal of “unification with the motherland,” one who does not support socialism should still be a target of the united front as long as one supports the unification. This explains why directors of the Xinhua News Agency, the CCP’s de facto embassy in Hong Kong before 1997, have made friends in all sectors in Hong Kong and recommended suitable people to the CPPCC.

However, according to Ching Cheong, a senior Hong Kong journalist, the communists had already begun planning the crackdown on the moderate pan-democrats before the July 1, 2003  rally, which was Hongkongers’ response to the government’s attempt to push forward the legislation of the controversial Article 23 of the Basic Law to prohibit treason, secession, sedition, and subversion against the China government. After the anti-extradition movement of 2019, even the Democratic Party, which was politically mild and willing to work with the Liaison Office, was labelled as “anti-China and causing troubles in Hong Kong.” Subsequent purges in the political, judicial, educational, and other professional sectors in Hong Kong also conformed to Ching’s observation about the communists “fighting with the intensity of a quasi-war.” In other words, the united front strategy has actually ended in Hong Kong, with the communists judging that the moderates’ dual character has disappeared and they are now classified purely as enemies. The communists now take a hard line on all fronts in Hong Kong.

All these create a paradox: on the one hand, the communists are celebrating in mainland China the centennial anniversary of the united front policy; on the other, Hong Kong’s chief executive John Lee does not know where to start telling the mandatory “positive Hong Kong story,” which is no different from admitting in the “grand foreign propaganda” (da waixuan) that the united front has failed in the special administrative region. The NSL has led to waves of emigration, which remind me of what Mao said in 1935 when arguing for the united front and against “close-doorism:” driving swarms of people to the enemies’ side will only make the enemies applaud.