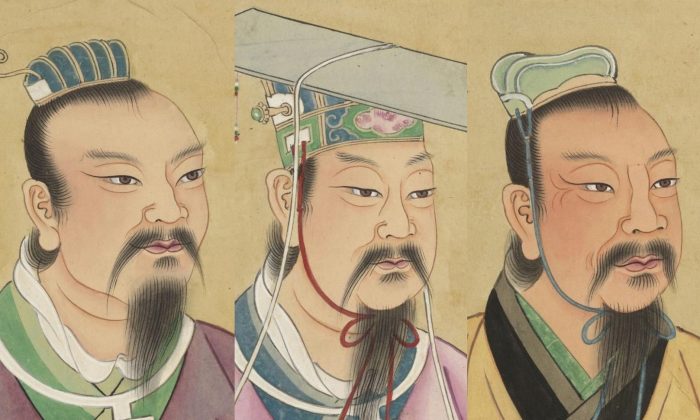 Emperor Yao Hands Power to the Most Able One, Not to His Son

During the reign of Emperor Yao, about 4,300 years ago, there was a great flood around the globe. The northern hemisphere was flooded up to 2,000 meters (about 6,600 feet) above sea level, ancient western civilizations were almost all wiped out.

At that time, the most prosperous area of the ancient Chinese civilization was in the western part of present day China, many people were living along the Kunlun Mountains in today’s Xinjiang region, lots of people escaped to the high mountains in time to survive the calamity.

The survivors saved a large quantity of prehistoric records such as the Book of Changes, the Eight Trigrams, scripts on Yin and Yang, the Five Elements, Chinese medicine, Taiji and some ancient forms of Qigong … thus China became the longest living civilized kingdom.

In his old age, Yao abdicated to give way to Shun who also had high virtue. This was the start of the Chinese tradition of abdication in favor of another able person. When Shun got old, he followed in the footsteps of Yao and abdicated to Yu the Great who gained merit by controlling the flood.

Dan Zhu was the son of Emperor and Empress Yao. He was considered incapable and not morally fit to inherit the throne.

Emperor Yao had 10 sons, but they were all of average ability. He let his ministers recommend one who could take the post of emperor from among the nobility and civilians, they all recommended Shun from a humble upbringing.

To become the Emperor in ancient China, one had to show a divine responsibility by satisfying three conditions: to be ordained by God, to have high virtue, and to exercise great capability. Emperor Yao tested Shun in these three aspects and Shun fulfilled all. So when Yao abdicated, he felt assured that Shun would be a strong successor.

Yao said: “If I abdicate to Shun, only Dan Zhu will be unhappy. If I abdicate to Dan Zhu, that would be bad for all. I will not cause harm to all just to benefit my son.”

It’s said that Yao loved Dan Zhu very much, but Dan Zhu remained playful and would not settle down.  He also talked big and was argumentative. Yao invented the master game of Go so as to train Dan Zhu.

‘Go’ is not a game focused on winning or losing, it aims to improve character and can help players understand the complementary rule of yin and yang to achieve harmony. It also helps players to become calm and enhance their temperament, morals and wisdom. After Dan Zhu took up Go he made rapid progress.