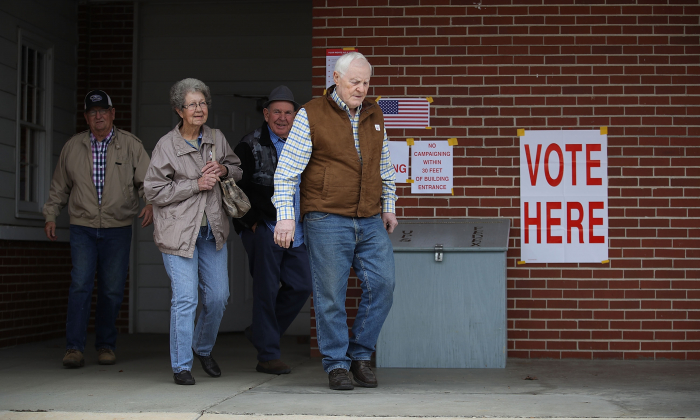 Voters exit after casting their ballots at a polling station setup in the Fire Department in Gallant, Alabama, on Dec. 12, 2017. (Joe Raedle/Getty Images)
Politics

An election-integrity watchdog is skeptical of an aggressive push for the Federal Elections Commission to investigate an alleged “false-flag” disinformation campaign during a 2017 special U.S. Senate election in Alabama.

While the campaign was allegedly perpetrated by Democratic Party operatives and funded by party mega-donors, the center-right Public Interest Legal Foundation is wary of emboldening federal authorities at the FEC, even though the secret social-media operation resembled the Russian meddling attack during the 2016 presidential election.

“Let’s call this what it is—an influence operation,” said Logan Churchwell, spokesman for the Public Interest Legal Foundation, in an interview. “But we shouldn’t fight fire with fire, to ban fire.”

In other words, “Be careful about giving the FEC too much power,” Churchwell said, warning about the potential for the Alabama false-flag event—where fake evidence was created to sway the election—to boomerang into regulating political speech.

The New York Times reported in December that the secret Alabama operation was funded in part by Democratic billionaire and Linkedin co-founder Reid Hoffman.

The project directed thousands of Twitter accounts designed to appear like Russian bots to follow Moore. A Facebook page then falsely portrayed Moore’s social-media efforts as being amplified by a network of Russian bots.

On Jan. 7, The New York Times reported on a second false-flag campaign that falsely promoted a non-existent Republican initiative to ban alcohol in the state.

Doug Jones, a Democrat, won the U.S. Senate seat in the deeply conservative stronghold of Alabama by just 1.5 percent, or 20,715 votes. Jones has denied any involvement or foreknowledge of the alleged social-media attack against his Republican opponent, Roy Moore.

In a letter dated Jan. 9, Jones asked FEC investigators to examine “efforts to disseminate misinformation” in the 2017 race to replace former Sen. Jeff Sessions, a Republican, after he was appointed U.S. Attorney General.

“It is imperative to send a clear message that these disinformation tactics will not be tolerated and will be punished to the fullest extent of the law,” he wrote.

A thorough investigation, however, could further implicate activist donors at the highest reaches of the Democratic Party.

The day after Jones’s FEC request, it was revealed that the Democracy Integrity Project, a nonprofit with funding ties to activist billionaire George Soros, was working with the technology firm New Knowledge in advance of the November midterm elections.

New Knowledge is the tech company implicated in the Alabama false-flag operation.

According to Chuck Ross of the Daily Caller, the Democracy Integrity Project and New Knowledge partnered in using a dashboard website called Disinfo2018.com. The site purportedly tracked foreign social-media disinformation networks during the 2018 midterm campaign.

Jonathon Morgan, the founder of New Knowledge and a former State Department adviser, helped create Hamilton 68. Morgan said the Alabama project was only an experiment that had no effect on the special election.

As previously reported by The Epoch Times, wealthy donors from California and New York, including Soros, have paid $50 million to Daniel Jones’s organization to conduct a private, parallel investigation into President Donald Trump’s alleged collusion with Russia during his 2016 presidential campaign.

An April 2017 House Intelligence Committee report concluded that there was no evidence of collusion between the Trump campaign and Russia. However, the special counsel investigation into Russian election meddling and alleged Trump campaign collusion continues.

According to The Washington Post, a document was circulated among Democratic operatives during a secret meeting held in Washington, in September 2017, just weeks before the Alabama special election. The operatives were attempting to identify ways to shift support away from Moore, and over to Jones.

Tweets with Russian language Cyrillic characters were created and amplified shortly thereafter, with news organizations subsequently reporting that Moore was being supported by Russian efforts.

Hoffman supplied about $100,000 for the “Project Birmingham” operation, which is roughly equivalent to the Russian disinformation Facebook posts in 2016. Hoffman has since apologized and denied any knowledge of wrongdoing.

“I categorically disavow the use of misinformation to sway an election,” Hoffman said. “I would not have knowingly funded a project planning to use such tactics, and would have refused to invest in any organization that I knew might conduct such a project.”

Mikey Dickerson is another identified key actor in the Alabama false flag. Dickerson is a Democratic operative known for fixing the Affordable Care Act’s calamitous health insurance website. He also denies knowledge of any wrongdoing.

The Alabama attorney general also has called on federal authorities to investigate.

“The Attorney General’s Office has evaluated reports of possible deception in the Alabama U.S. Senate race and has determined the matter to be under the exclusive jurisdiction of the U.S. Federal Election Commission,” a spokesman for the attorney general’s office said Jan. 8.

“Accordingly, the Attorney General has requested that FEC officials investigate the matter to determine if any federal laws were violated.”