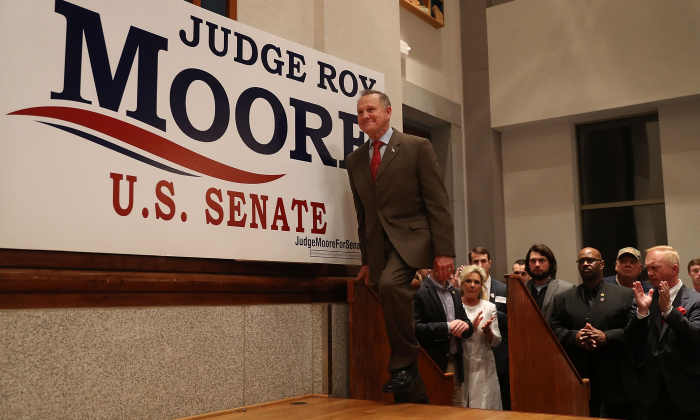 The Alabama attorney general on Jan. 7 called on federal authorities to investigate the state’s 2017 special election for the U.S. Senate.

Alabama Attorney General Steve Marshall made the announcement after conducting an informal inquiry into reports of a false-flag operation designed to boost Democrat Doug Jones, who defeated Republican Roy Moore by a narrow margin in a hotly contested race.

The New York Times reported in December that a secret social-media operation funded by billionaire Democratic donor Reid Hoffman directed thousands of accounts designed to appear like Russian bots to follow Moore. A Facebook page then falsely portrayed Moore’s social-media efforts as being amplified by a network of Russian bots.

Then, on Jan. 7, The New York Times reported on a second false-flag campaign that targeted Moore, this time by falsely promoting a non-existent Republican campaign to ban alcohol in Alabama.

Marshall said he’s concerned about the tactics used in the election. Jones became the first Democrat to win a U.S. Senate election in Alabama in 25 years after defeating Moore by a slim margin for the seat vacated by then-Attorney General Jeff Sessions. Moore refused to concede the election and pursued an unsuccessful legal challenge claiming voter fraud.

“The Attorney General’s Office has evaluated reports of possible deception in the Alabama U.S. Senate race and has determined the matter to be under the exclusive jurisdiction of the U.S. Federal Election Commission,” Mike Lewis, a spokesman for the Republican attorney general, said.

“Accordingly, the Attorney General has requested that FEC officials investigate the matter to determine if any federal laws were violated,” Lewis said.

The two false-flag operations were funded with $100,000 each. Facebook posts from the fake alcohol-ban campaign were viewed 4.6 million times and received 97,000 engagements, such as likes, comments, or shares by users. Jones defeated Moore by 22,000 votes.

Hoffman, who funded the Russian-bot campaign, said in a statement that he had no knowledge that his money would be used for the false-flag operation and disavowed the tactics.

“I would not have knowingly funded a project planning to use such tactics, and would have refused to invest in any organization that I knew might conduct such a project,” Hoffman said.

Dmitri Mehlhorn, the founder of Investing in US, the group that hired the firm to conduct the Russian bot false flag, renounced the operation’s tactics.

“Such tactics may win a battle but lose the war, by giving up on the American ideal that we seek,” Mehlhorn said in a statement.

In December, on the heels of the report on the Russian bot false flag, Jones called on the Justice Department and Federal Election Commission to investigate the allegations.

“What is obvious now is that we have focused so much on Russia that we haven’t focused on the fact that people in this country could take the same playbook and do the same thing,” Jones told Politico.

“It needs to not just be a congressional inquiry. People get called in front of Congress all the time. There needs to be a look to see if there were any laws that were broken,” he said.