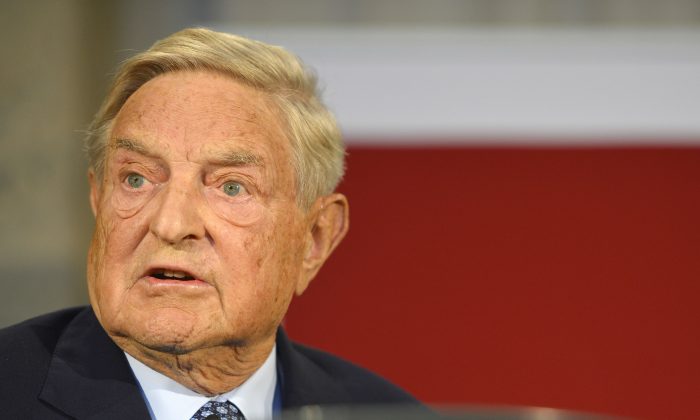 The revelation is part of the final report on Russian interference in the 2016 election released on April 27 by the House intelligence committee. The report concluded that there is no evidence of collusion between the Trump campaign and Russia.

A footnote in the report states that Daniel Jones, the former Feinstein staffer who runs the Penn Quarter Group (PQG), told the FBI in March 2017 that he is working on a project with Fusion GPS that “was being funded by 7 to 10 wealthy donors located primarily in New York and California, who provided approximately $50 million.”

“[Redacted] further stated that PQG had secured the services of Steele, his associate [redacted], and Fusion GPS to continue exposing Russian interference in the 2016 U.S. Presidential election,” the report continues, adding that Jones “planned to share the information he obtained with policymakers … and with the press.”

Though Soros is not named in the House report, his name was linked to Jones’s efforts in testimony by lawyer Adam Waldman to the Senate Select Committee on Intelligence in November.

Waldman told senators that Jones relayed information to him in March last year that Jones was working with Fusion GPS and that the work was funded by a “group of Silicon Valley billionaires and George Soros.” Soros is notorious for funding far-left causes around the world.

Soros is notorious for funding far-left causes around the world.

Jones also told Waldman that his group passed stories to Reuters and McClatchy. The Reuters story on the amount of real estate in Trump properties owned by Russians found no wrongdoing by Trump. The McClatchy story on Trump’s personal lawyer traveling to Prague has not been corroborated.

The names of Jones and Waldman first emerged as part of the Russia probe in February, when Fox News published text messages between Sen. Mark Warner (D-Va.) and Waldman. The messages revealed that Warner connected with Waldman in order to meet with Steele. Warner was on the Senate intelligence panel that was investigating Russia at the time.

Steele compiled the infamous anti-Trump dossier for Fusion GPS. The Hillary Clinton campaign and the Democratic National Committee hired Fusion GPS through a law firm to conduct the research.

The resulting dossier was shared with the FBI. Despite the dossier containing unverified claims, the FBI used it to apply for a secret-court warrant to spy on the Trump campaign. Four top Obama administration officials have been referred for criminal investigation in April for their roles in obtaining the warrant. Steele was referred for criminal investigation in January for making false statements.