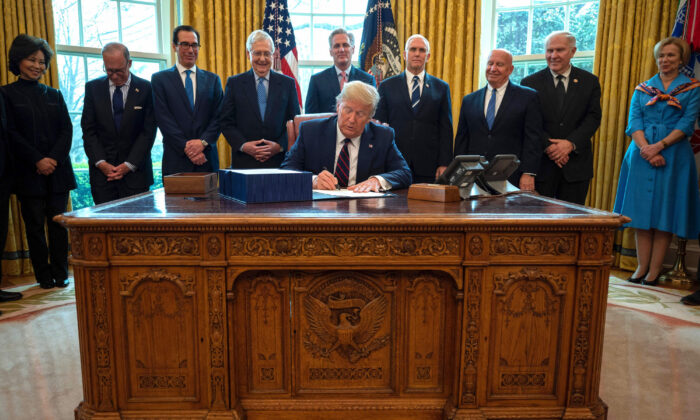 President Donald Trump signs the CARES act, a $2.2 trillion rescue package to provide economic relief amid the CCP virus outbreak, at the Oval Office of the White House on March 27, 2020. (Jim Watson/AFP via Getty Images)
By Emel Akan

WASHINGTON—The rapidly escalating COVID-19 pandemic has led to an aggressive response from the U.S. government, with unprecedented coordination between fiscal and monetary authorities.

President Donald Trump signed into law on March 27 a $2.2 trillion economic rescue package to address the severe disruptions caused by the CCP virus, commonly referred to as the novel coronavirus. Economists believe that the relief measures for cash-strapped households and businesses are bound to have some positive effect on the economy.

“The current fiscal package looks adequate, for now, assuming economic activity begins to normalize around mid-May. If it does not, we may need a bigger boat,” Brett Ryan, senior U.S. economist at Deutsche Bank wrote in a report.

He says the extraordinary coordination between fiscal and monetary authorities was the “novel feature” of this package.

The Department of the Treasury will provide $450 billion to the Federal Reserve to purchase loans and investments, as part of the package.

“This is incredibly important,” Ryan noted. It will provide roughly $4.5 trillion of lending capacity to the public and private sectors.

Fed Chairman Jerome Powell earlier stated that the central bank could provide $10 in loans for every $1 it receives from the Treasury. That would allow the Fed to provide liquidity to the market and purchase corporate, municipal, and state debt.

The Fed will undertake open-ended quantitative easing for its asset purchasing program, which represents a potentially new chapter in the Fed’s “money printing.”

“These purchases will be designed to help the economy and the financial markets recover,” Carl Tannenbaum, chief economist of Northern Trust Asset Management, wrote in a report.

He said central banks have historically played crucial roles in lending during times of crisis.

“Purists will certainly feel uneasy about this apparent compromise of central bank independence. But with interest rates at zero in most major markets, traditional levers of monetary policy have been exhausted. Financing fiscal efforts is the best way for central bankers to continue to pursue their mandates,” Tannenbaum said.

The relief package includes direct payments of $1,200 to most Americans and jobless benefits to millions who have lost jobs.

Companies of all sizes will get loans, grants, and tax breaks. Large companies that have been directly harmed by the effects of the pandemic will receive direct aid.

The measure also includes billions of dollars for states and the health care system. Aid to states is a crucial part of the bill, as it would help prevent layoffs in local government and a related drop in public services.

“All of these elements should provide a short-term financial and psychological boost that is urgently needed,” Tannenbaum said.

Corporate profits have started to take a big hit from the economic fallout of the COVID-19 pandemic.

Wall Street analysts have sharply revised down earnings estimates for the second quarter. The S&P 500 companies are now expected to see a nearly $50 billion decline in total profits in the second quarter, according to FactSet.

Since March 1, estimated earnings for the S&P 500 companies for the second quarter have slipped to $320 billion from $369 billion, the data provider stated in a report.

At the industry level, oil, gas, and consumable fuels, as well as airlines, are seeing substantial declines in estimated earnings. Other industries that are most affected include automobiles, hotels, restaurants and leisure, and banks.

U.S. Chamber of Commerce, the nation’s largest business organization, representing the interests of more than 3 million businesses, praised the U.S. stimulus bill in a statement.

“Securing these funds could make the difference between keeping a business up and running over the coming weeks or being forced to reduce salaries, lay off employees, or shutter businesses entirely,” the chamber stated.

The stimulus package will also provide some boost to the oil price in the longer term, according to Phil Flynn, a senior energy analyst at Price Futures Group in Chicago.

“Normally, you don’t like to see government intervention in a free market, but let’s face it, in this crisis, it’s warranted,” Flynn told The Epoch Times.

“I personally believe that it’s going to be a big boon for energy prices down the road.”

Oil prices plunged in recent weeks as the CCP virus weighed down on global demand. A price war between Saudi Arabia and Russia has also contributed to the sharp drop in energy prices.

“A few months from now when we start reopening factories and cities—and China’s already getting back to normal—we’re going to see pent-up demand,” Flynn said.