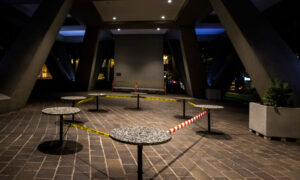 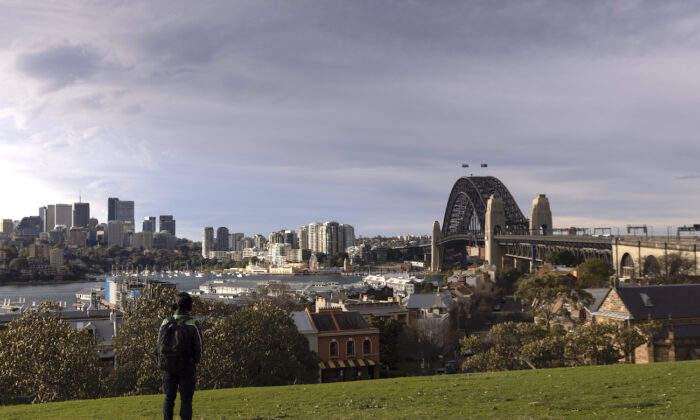 A person looks out over the Harbour Bridge from Observatory Hill in Sydney, Australia on July 20, 2021. (Brook Mitchell/Getty Images)
Australia

Reserve Bank of Australia said the country might experience a recession over the next half-year if COVID-19 outbreaks worsen but think it’s “unlikely.”

RBA Governor Philip Lowe told the House of Representatives economics committee on Friday that the extent of economic contraction in the next few months depended on the length of lockdowns and the probability of future outbreaks.

“We can’t rule out two-quarters of negative GDP if the health situation deteriorates, but I think it is quite unlikely at this stage,” Lowe said. “By the end of the year, many of us will be vaccinated; one hopes the restrictions are being eased later this quarter and into the next quarter.”

Lowe also said it was important to note that not the entire country was affected by the lockdowns, and “significant” parts of the economy are still on the positive trajectory from before the outbreaks.

The central bank also expects the economy will contract in the September quarter (Q3) then bounce back and recover strongly once lockdown restrictions lift.

“While the exact timing of the bounce-back is difficult to predict, it is likely to start well before the end of the year,” Lowe said.

The RBA downgraded its economic forecast for December 2021 from 4.75 to 4 percent growth.

However, according to National Australia Bank (NAB), the country is already in a recession.

NAB director of economics and markets Tapas Strickland told The Australian Financial Review that the economy shrank between 1 and 1.9 percent during the current quarter, and Q3 was likely to be “deeply negative.” Thus, making it possible for a recession to occur even before the December quarter.

The other three major banks have also all forecasted negative growth for the third quarter but are more optimistic than NAB.

Commonwealth Bank (CBA) expects the country’s GDP to shrink by 2.7 percent over the next quarter, ANZ predicts a 1.3 percent fall, and Westpac believes the economy will decline by 2.2 percent.

CBA called the recent lockdowns a “major pothole” to previous economic forecasts and expected the economy to become “two-speed.”

“The NSW economy will contract heavily over Q3 21 as restrictions to limit the spread of the virus reduce the production of goods and services,” CBA head of Australian economics Gareth Aird said. “In contrast, the rest of Australia is likely to expand modestly, subject of course to any further COVID-related distributions.”