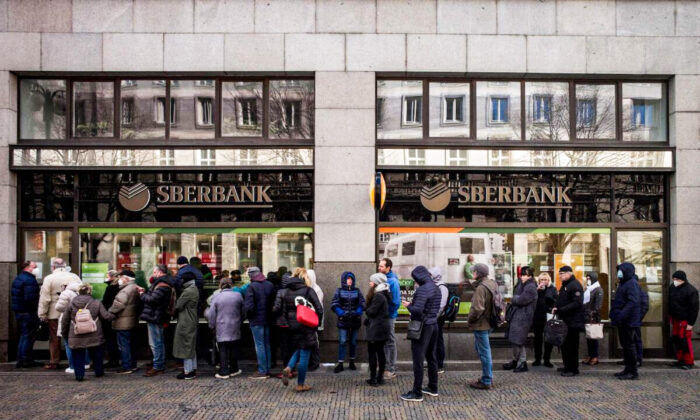 People queue outside a branch of Russian state-owned bank Sberbank to withdraw their savings and close their accounts in Prague on Feb. 25, 2022, before Sberbank closed all its branches in the Czech Republic later in the day. (Michal Cizek/AFP via Getty Images)
Viewpoints

Economic Consequences of the Russo-Ukrainian War

On Feb. 24, a new war shocked Europe when Russia launched a major military campaign against her southern neighbor, Ukraine. The force Russia has mustered—ground troops estimated to be in the range of 190 000—implies that the aim of the invasion is to take all of Ukraine if not a major part of it.

While the human suffering of war can be enormous, its economic consequences can also be dire. Effects consist of both direct economic effects and those caused by sanctions. What we see happening now is both military and economic escalation spreading more widely into other arenas, even social media and the world of sports.  Let’s look at some key areas and their likely impacts so far.

Western nations have cut off some Russian banks from the Society for Worldwide Interbank Financial Telecommunication, or SWIFT, system. It is a system for quick and secure communication between banks. No money is transferred, but it is a crucial part of the global financial infrastructure as important financial transaction information is transferred through it. Exclusion from it will make it considerably more difficult for Russia to operate in the modern banking world. This is now visible, e.g., in Finland, where major corporations are reporting that transactions to and from Russia have seized.

The financial ties of several European countries to Russia are strong—for example, J.P. Morgan has estimated that claims of European banks on Russia total $80 billion. Italy, France, and Austria in particular have major claims on Russia. This probably explains why all Russian banks have not been (currently, at least) excluded from SWIFT. It would also make it practically impossible for other countries to pay for their energy imports from Russia—and is something that some countries, like Germany, want to avoid at any cost.

News of cutting Russia off from SWIFT has already sparked bank runs in Russia. In a drastic move, the central bank of Russia raised its key interest rate from 9.5 to 20 percent. This is a sign of desperation and the fear of wide-spread currency flight and bank runs. To further contain this threat, on Feb. 28, Russia banned all financial transfers abroad. On the same day, the EU and the United States agreed to ban all transactions with the Russian central bank. This means that the central bank will not be able to access a majority of its foreign reserves.

Now that we find ourselves in the middle of a global ‘financial war’ against Russia, what are the likely economic end-scenarios for all of this? In such a fluid and volatile situation, it is difficult to visualize all the possible conclusions, but the ‘good’ and the ‘bad’ scenarios can be sketched.

If Russia and Ukraine reach a lasting ceasefire quickly, we would experience the ‘good’ scenario. Tensions would start to ease. A rapid and complete retreat of Russian forces would still be unlikely. It has been a goal of President Vladimir Putin, based on his past and recent remarks, to establish a land corridor to the annexed Crimean Peninsula. He’s unlikely to yield on that. So even in the ‘good’ scenario, we would probably be facing a prolonged crisis between the two nations. This is likely to keep some pressure on commodity and energy prices for months to come. Moreover, exclusion from SWIFT and the “ring-fencing” of the Bank of Russia could be maintained as long as Russian troops remain on Ukrainian soil.  Thus, even in the ‘good’ scenario, we would probably not return to normal anytime soon. It should also be noted that meddling with and even “weaponizing” the global financial and economic architecture, such as the SWIFT system, central bank transactions, and limits to trade, will have many unintended, unforeseen, and potentially long-lasting consequences.

In the ‘bad’ scenario, the war drags on and eventually mutates into a very destructive guerrilla war. This would have serious effects on global food and energy prices, supply chains, and naturally on the financial system.

Wheat and other food exports from Ukraine would diminish or cease entirely, which would send global food prices skyrocketing. Other commodity prices would also rise, and supply chain issues would return—with a vengeance (there are already indications of this). Inflation pressures would start to build, dramatically, and inflation would reach double digits in 2-3 months. This could force central banks to emergency rate rises and to halt all bond purchase programs. Uncertainty and volatility in the financial markets could increase significantly.

Inflation in Russia would reach figures not seen since the breakup of the Soviet Union (hyperinflation). Russian banks would start to topple, leading to widespread knock-on losses, especially for already-weak Italian and French banks. Rising rates would hammer households and corporations on both sides of the Atlantic. A banking crisis would engulf Europe and a sovereign debt crisis would re-emerge in a massive way.  Italy would fall into a political crisis, almost certainly default and leave the euro. Greece, Portugal, and Spain would follow, and then the eurozone finally fragments. And as the euro unravels, the world would face a currency crisis of epic proportions.

The banking crisis would quickly spread to the United States. Fire sales in the junk bond markets would commence and spread to credit markets more broadly. There would be a corporate debt crisis, and the United States would, most likely, enter a deep economic recession (depression).

Moreover, if Russian banks are completely barred from SWIFT, Russia would probably create disruptions in gas and oil exports, as a retaliatory measure. It would also become very difficult for western countries to pay for imports from Russia, which would, most likely, create unseen havoc in the global financial system and trade.

How likely is such a ‘bad’ scenario? At this point, it’s impossible to assess, because everything depends on mostly unknown political forces and motives, not to mention the random risks of war. Broader risks to the world economy in recent years have been mostly hidden under a ‘liquidity blanket’ provided by central banks, especially the ECB and the Fed. This is why, for example, the true financial condition of the European banking sector is shrouded in mystery.

The main economic concern is that if the war causes inflation to accelerate further from here, the options for central banks become very limited, while financial markets may become very unstable. In that situation, the economic worst-case scenario can easily materialize, as central banks will be unable to react to a meltdown of the financial markets.

Thus, we just have to hope that cool heads and wisdom prevail.