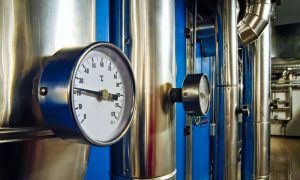 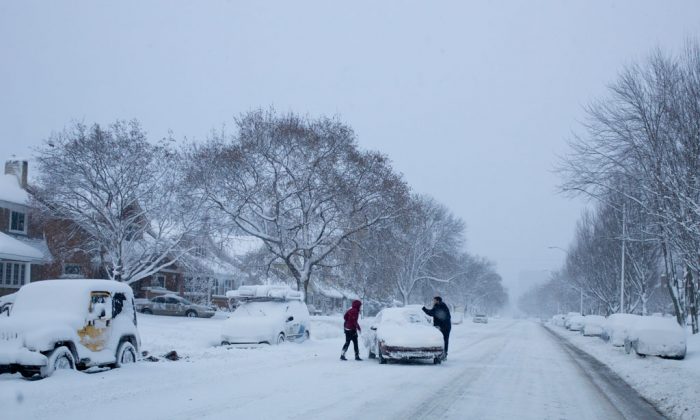 People attempt to move a vehicle out of the middle of the road along Lake Michigan Drive, Tuesday, Nov. 18, 2014, in Grand Rapids., Mich. Michiganians are shivering after a pre-winter cold weather system with gale-force winds broke temperature records and dumped up to foot and a half of snow. (AP Photo/The Grand Rapids Press, Joel Bissell)
US

BUFFALO, N.Y.—Several feet of lake-effect snow paralyzed the Buffalo area Tuesday, forcing state troopers on snowmobiles to deliver blankets to stranded motorists on the New York State Thruway on a wintry day when temperatures fell to freezing or below in all 50 states.

In a region accustomed to highway-choking snowstorms, this one is being called one of the worst in memory. Snow blown by strong winds forced the closing of a 132-mile stretch of the Thruway, the main highway across New York state.

“Other than wishing they weren’t stuck in traffic, they’re warm and safe in their vehicles,” Kennedy said. Poloncarz was expecting the remaining motorists to be evacuated by nightfall because of plunging temperatures.

Meteorologists say temperatures in all 50 states fell to freezing or below on Tuesday. They say the low temperatures were more reminiscent of January than November.

In New Hampshire and elsewhere, icy roads led to accidents. Lake-effect storms in Michigan produced gale-force winds and as much as 18 inches of snow, and canceled several flights at the Grand Rapids airport.

Schools closed in the North Carolina mountains amid blustery winds and ice-coated roads. In Indiana, three firefighters were hurt when a semitrailer hit a fire truck on a snowy highway.

In Atlanta, tourists Morten and Annette Larsen from Copenhagen were caught off-guard by the 30-degree weather as they took photos of a monument to the 1996 summer Olympics at Centennial Olympic Park.

“It’s as cold here as it is in Denmark right now. We didn’t expect that,” Larsen said, waving a hand over his denim jacket, buttoned tightly over a hooded sweatshirt.

In Buffalo, Brian Krzeminski watched the snow pile up outside the south Buffalo convenience store where he worked overnight and served free coffee to the motorists and pedestrians who came in off the city streets to get out of the blinding snow.

The National Weather Service warned that the snow, generated by cold air blowing over the warmer Great Lakes, would continue through Wednesday and could eventually total 6 feet in places. New York Gov. Andrew Cuomo deployed 150 member of the National Guard to help clear snow-clogged roads and remove abandoned vehicles.

“We have tried to get out of our house and we are lucky to be able to shovel so we can open the door. Basically, that’s it, open the door,” said Linda Oakley of Buffalo. “We’re just thinking that in case of an emergency we can at least get out the door. We can’t go any further.”

“All around us, it’s a solid four feet of snow that is so thick and so heavy you can hardly move it with a shovel,” said Oakley, whose son Todd was with her, unable to make it to work just three miles away.

Jim Lehmann was hunkering down with his wife in their town of Hamburg home, while outside his neighbor’s house was barely visible through the blowing snow.

“The main thing to do now is sit in the house and wait it out,” Lehmann said. “My neighbor works for a satellite dish company and he tried to get out this morning and he got stuck 80 feet down the street. And he was there for three hours.”

The town of West Seneca recorded 45 inches by late morning and Alden, to the east, had 48 inches. But typical of lake-effect snow, areas just a few miles away, including downtown and north Buffalo, had just a couple of inches.

At one point, nearly half of West Seneca’s plows were bogged down in heavy snow, officials told The Buffalo News. In neighboring Orchard Park, the highway superintendent called the rate of snowfall “unbelievable,” while next door in Hamburg police cars were getting stuck.

Oakley and her son, Todd, were passing the time watching “Dumb and Dumber” on Netflix.

“We can’t even walk down to the end of the street and get ourselves a pizza,” she said, laughing. “Maybe if you had snow shoes, I don’t know.”