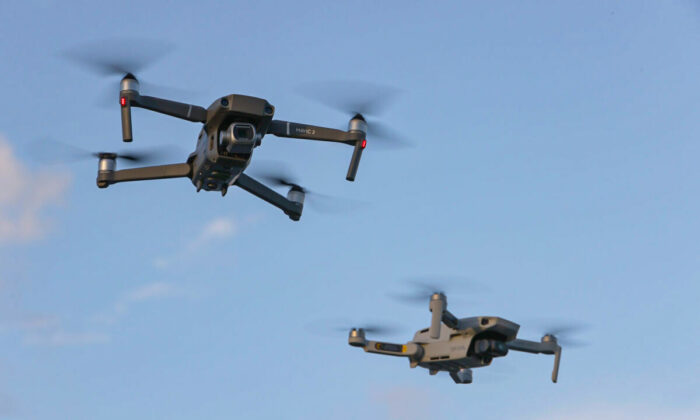 A DJI Mavic 2 Pro and DJi Mavic Mini made by the Chinese drone maker fly near each other in Miami, Florida, on Dec. 15, 2021. (Joe Raedle/Getty Images)
China Business & Economy

Russia has quickly become a wasteland for western tech brands, with names like Apple, HP and Dell all suspending local operations after the country’s invasion of Ukraine and a crush of western sanctions that followed. While such a vacuum might look tempting for Chinese companies, the reality is far less clear due to the potential for losing access to more important western markets if they stay in Russia.

Against the backdrop of that threat, leading global drone maker Da-Jiang Innovations (DJI) announced on April 26 it would suspend its business activities in both Russia and Ukraine. Though western sanctions weren’t mentioned in the statement on its English website, it pointed out that the company is “internally reassessing compliance requirements in various jurisdictions.” The move made it the first Chinese company to officially shutter its Russian operations.

Now other companies with major operations in both Russia and the west, including the likes of Alibaba, Lenovo and Huawei, must decide whether to take similar steps or risk getting locked out of those markets and face other potential actions like losing access to foreign banking systems.

Since Russia first invaded Ukraine in February, both sides have been accused of using DJI drones, considered some of the world’s best, for military operations. Ukraine even claimed that the company was supplying military data to Russia. DJI also took flak at the start of the war for keeping its Russian business running even as western companies were halting their activities.

On March 27, Germany’s biggest electronics retailer MediaMarkt pulled all DJI’s drone products from its shelves, drawing international attention. DJI called the accusation that it made data only available to the Russian side groundless. On April 21, it published another statement saying that all its products were strictly for civilian use with no military designs whatsoever, adding it had refused to customize or modify its products for military purposes.

DJI controlled 76.1 percent of the U.S. drone market last year, and close to 80 percent of drones worldwide are manufactured by the company, according to data from Drone Industry Insight. The company emphasized it decided to suspend sales in Russia not to single out any country, but as a statement of principle. But observers largely see the step as defensive to prevent losing far more important western markets if it decided to stick with the Russians.

DJI is far from alone in such a dilemma. Other Chinese companies may see the current situation as a golden opportunity to expand their presence in Russia. But they also realize that doing so could cost them the entire western market and also subject them to sanctions, which would ultimately make any gains in Russia a hollow victory.

Russia has become fertile ground for globally minded Chinese companies and their western counterparts in the last decade, seeking to tap one of the world’s largest developing markets. Take the smartphone sector, for example, where China’s Xiaomi was Russia’s second biggest brand behind only global giant Samsung and ahead of No. 3 Apple, which has now left the market.

In PCs, U.S. giant HP was Russia’s largest brand with 21 percent of the market last year, with China’s Lenovo as a close No. 2. Huawei was the market’s biggest telecom equipment supplier, competing fiercely with Sweden’s Ericsson for local 5G contracts.

That said, those Chinese companies get far more business from the west. Xiaomi’s latest financial report showed it took 22.5 percent of Europe’s smartphone market last year, ranking second; it earned 163.59 billion yuan ($24.7 billion) outside China, close to half its total. The situation was similar for Lenovo, which made $8.49 billion in Europe, the Middle East and Africa combined in the first half of its last fiscal year through September, accounting for 24.4 percent of its total revenue. Its Americas business was even larger, generating $11.33 billion or 32.6 percent of its total.

Xiaomi, Lenovo and Huawei have already slashed their deliveries to Russia over the past two months as a result of foreign exchange risks, after the ruble initially plummeted at the start of the war. Presumably they are now more worried that continued sales to Russia could make them susceptible to western sanctions, which could result in being kicked out of western markets.

Alibaba and Tencent are facing a similar quandary. Russia is a major market for Alibaba’s AliExpress, which helps Chinese businesses engage with buyers in other countries. It even set up a joint venture in Russia called AliExpress Russia, which had 35 million monthly active users. The venture generated $1.86 billion in gross merchandise volume in the first half of last year, up 36 percent year-on-year, accounting for around 10 percent of the Russian e-commerce market. The venture had planned to go public in Russia early this year, but pulled the plug when the war broke out and the ruble nosedived.

The Russian market is not significant to Alibaba in terms of overall revenue. But now the company must worry that its continued operation of AliExpress Russia might lead to sanctions that could deny the parent company access to markets in the U.S., France and Brazil, among others.

Even gaming isn’t above the fray. Ukrainian Vice Prime Minister Mykhailo Fedorov posted tweets calling for 12 gaming companies to end their sales to Russia, including Tencent. At the same time, tough stances against Russia by western companies like Microsoft, Electronic Arts, Take-Two, Ubisoft and Sony have created a huge headache for Tencent because two of its games are among Russia’s most popular. The Russian e-gaming market is also one of world’s fastest-growing and an important foreign market for Tencent.

Tencent has not signaled its intent in the market, though it has faced difficulties processing payments there after Mastercard and Visa stopped their Russian operations. Online payment platforms like Apple Pay are no longer in use either. Even China’s own UnionPay is avoiding business with sanctioned Russian banks for fear of becoming collateral damage.

At the end of the day, the war in Ukraine has left Chinese companies in an unfamiliar global geopolitical minefield where they are only now learning how to tread. They don’t want to jeopardize their Russian operations, nor appear unfriendly to one of China’s closest allies. But they don’t want to antagonize the west either. That means many will likely be forced to decide whether to follow DJI’s example, or to take their chances by continuing to do business in Russia.