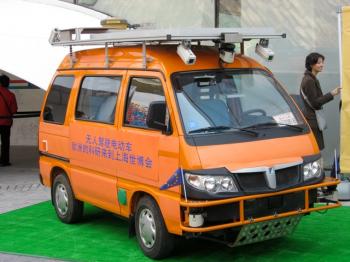 An autonomous van designed by VisLab at the World Expo in Shanghai after completing the longest journey ever taken by an unmanned vehicle. (Courtesy of VisLab.)
Tech

Conan Milner
writer
Conan Milner is a health reporter for the Epoch Times. He graduated from Wayne State University with a Bachelor of Fine Arts and is a member of the American Herbalist Guild.
View profile
Follow
biggersmaller
Print
A driverless electric van drove more than 8,000 miles from Italy to China, completing the longest distance ever taken by an autonomous vehicle. The orange van departed from Italy on July 20 and arrived at the World Expo in Shanghai on Oct. 28 in a three-month cruise traversing two continents.

VisLab, the artificial vision and intelligent systems laboratory at Italy’s Parma University, is the technology company responsible for the project. Not only was their intercontinental demonstration a historical first, the electric-powered van also made the trip without oil-based propulsion.

A solar panel powered the autonomous driving system, while other equipment received their power from rechargeable batteries. VisLab says their vehicle is completely self-sustainable.

At the end of the trip, VisLab presented their van at the Expo’s European Pavilion. According to the company’s website, Italy’s foreign affairs minister Franco Frattini and University of Parma’s Rector Gino Ferretti welcomed the vehicles during the visit of Italian President Giorgio Napolitano.

Last month, Google made headlines when its own driverless car made a 350-mile California-based trip. While the Internet search company seemed to garner the most attention for their vehicle, it was by no means the first attempt at an autonomous car.

Researchers first began exploring ways to create Unmanned Ground Vehicles (UGV) in the 1960s, and the military developed a UGV prototype in the 1980s to help automate its ground fleet.

Defense Advanced Research Projects Agency (DARPA) has inspired much of the more recent work on driverless vehicles. The agency hosted several challenges a few years ago to test the performance of driverless vehicles in desert, and even urban, environments.

The difference, says VisLab, is that these tests were conducted under highly controlled scenarios. The Italian company explains that they chose the intercontinental challenge so that they could truly test their technology under extreme, unpredictable, real world conditions. VisLab proposed the project to the Italian Ministry in 2007 and began planning logistics two years later.

The VisLab vehicles were outfitted with cameras, GPS systems, and other equipment to navigate without the aid of a driver. The van is designed to detect lanes, pedestrians, and other vehicles; estimate slope terrain; as well as plan trajectory, actuation, and control. In addition to the 8,000-mile journey, the team would stop in major cities to present demonstrations of their vehicle.

VisLab carried a convoy of four autonomous vans, and sometimes operators in the lead vehicle would determine the route for the others to follow. When GPS maps were unavailable in certain areas, the lead vehicle communicated the route to the other vans via radio.

While the leader vehicle was designed to be completely autonomous, an operator occasionally had to take control of the van. VisLab logged each operator intervention to compute the final percentage of autonomous driving.

Of course, even with occasional help from an actual operator, the drive wasn’t all smooth sailing. VisLab tried to prepare for various problems, such as carrying a generator for battery charging in places where electricity wasn’t available. The team encountered many challenges along the way, recording significant developments in their journal and posting entries on an interactive blog.

“Today we had to fix a massive battery charger failure: all of them got broken at the same time because of a spike produced by the power supply unit,” reads the Oct. 14 journal entry. “This was really bad news, since no battery charger means no driving, period. Nevertheless, we managed to solve the problem by replacing two units with spare parts and getting the other two back to a functional state using some random stuff we had in the trucks. The journey goes on…”

Having completed the 8,000-mile test drive, researchers have another valuable reference for future developments in the field of vehicular robotics. VisLab says it’s a crucial step toward fully autonomous intercontinental travel.