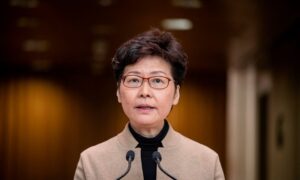 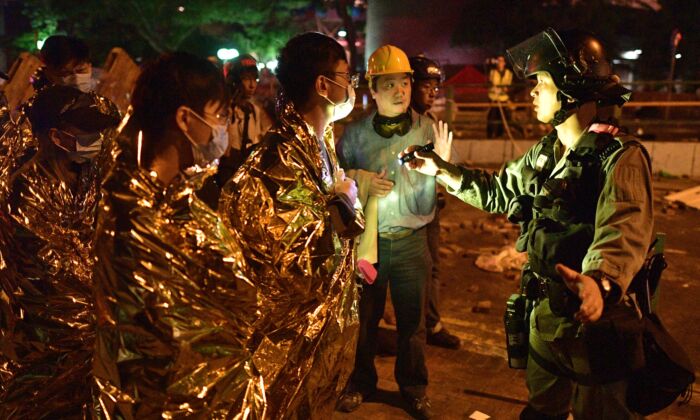 A policeman inspects the unwell and injured protesters wrapped in emergency thermal blankets, as they prepare to leave the campus of the Hong Kong Polytechnic University in the Hung Hom of Hong Kong on November 19, 2019. (NICOLAS ASFOURI/AFP via Getty Images)
HK Current Affairs

A pro-democracy lawmaker brought dozens of protesters out of Hong Kong’s Polytechnic University (PolyU) as police continued to surround the campus on Nov. 19.

As of press time, protesters were reported to still be trapped inside the campus, though it’s unclear how many.

Lawmaker Ted Hui Chi-fung said at least 20 protesters were holed up at the campus without enough water and food supplies.

“Some protesters were injured and exhausted,” he told media in the afternoon as he left with the group. Some reporters and first-aid medics were also stuck inside, he added.

Intense clashes between the police and protesters at PolyU began this weekend, as police blocked off the university campus for three straight days, firing rubber bullets and tear gas, and preventing people trapped inside the school from leaving. Protesters fired back petrol bombs and arrows.

On Tuesday morning local time, Hong Kong government leader Carrie Lam said at a press conference that 400 people have left PolyU voluntarily and were subsequently arrested by police surrounding the campus, on suspicion of rioting. She added that 200 others, who were under the age of 18, were allowed to go home after the police collected their personal information.

On Tuesday evening, 14 protesters fled from the campus by climbing into the school’s sewer drainage system and successfully finding an exit route.

Local newspaper Apple Daily reported that at around 9 p.m. local time, 17 protesters planned to escape via the drainage system, but when the group saw the dark environs and that the water inside reached up to their shoulders, three of them jumped out and waited there for updated from their peers.

At about 11 p.m. local time, the 14 protesters sent messages to the three, confirming that they had successfully fled and were safe.

The previous night, protesters escaped by tying ropes and plastic hosing onto a footbridge, and climbing down to the road, where dozens of ordinary Hongkongers were waiting to pick them up on motorcycles.

After police discovered this escape route, they blocked the footbridge.

Since Nov. 18, more than 50 principals from different Hong Kong middle schools and high schools went to the campus and convinced their students to leave, according to local media. But police did not allow them to take home students who were 18 years-old or older.

Early morning on Nov. 19, Hong Kong riot police were driving three white buses filled with protesters that they had detained near the Yau Ma Tei area. According to police, they arrested roughly 200 demonstrators. Many were there in order to distract police resources from PolyU.

In a widely circulated video, the buses are seen suddenly driving at top speed. One protester is hit, while the incoming vehicles caused a stampede, which injured about 30 others, according to local media.

One of the police buses can be seen pushing forwarding a boy standing on the road, for more than 10 meters (33 feet) on the ground.

In response to the incident, Wong Wai-shun, a senior superintendent of the Hong Kong police, said during a Tuesday press conference that “driving fast doesn’t mean it’s unsafe.” Wong added that police would take the responsibility if the incident resulted in casualties.