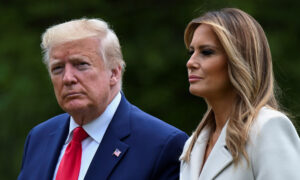 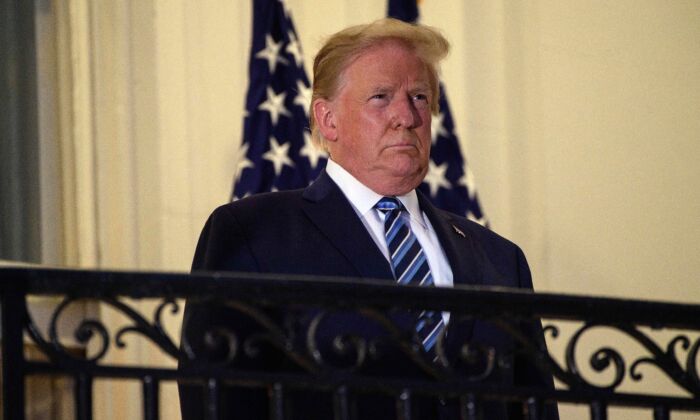 President Donald Trump looks out from the Truman Balcony upon his return to the White House from Walter Reed Medical Center, where he underwent treatment for COVID-19, in Washington on Oct. 5, 2020. (Nicholas Kamm/AFP via Getty Images)
China-US News

“Trump’s medical team said that he hasn’t fully recovered. … He will receive 24 hours of medical care in the White House. … He will work online or postpone all election campaigns,” state-run media Xinhua reported within hours after Trump was discharged from Walter Reed National Military Medical Center late on Oct. 5.

At the time, Trump’s medical team stated in a briefing that the president hadn’t had a fever in more than 72 hours and his oxygen levels were normal. Trump also wrote in a tweet before leaving the hospital that he would resume campaigning activities soon.

Meanwhile, Xinhua didn’t publish a close-up photo of Trump returning to the White House that evening, instead, choosing one from an aerial view.

“Xinhua intentionally avoided using Trump’s photo that would reveal he was full of energy,” U.S.-based China political affairs commentator Zhong Yuan said on Oct. 7. “This shows how disappointed the state-run media were.”

Since Oct. 6, one fake news story has been broadly circulating on the Chinese internet.

The post includes a screenshot of Trump giving a televised speech, with the following subtitles: “The doctors said they’ve never seen a body kill the coronavirus like my body. They tested my DNA and it wasn’t DNA. It was USA.”

Chinese social media posts claimed it was from a speech Trump delivered on Oct. 4 at the hospital, but he made no such comments. An internet search by The Epoch Times found that the photo originated from a Twitter post on Oct. 3 by Keaton Patti, a writer and comedian living in New York City.

Chinese social media platforms also spreading other rumors, such as more than 30 people contracted the virus from Trump; Trump’s return caused chaos at the White House; and a conspiracy theory that Trump wasn’t actually infected.

At the same time, many Chinese netizens posted well-wishes to Trump and said they were looking forward to the next debate between Trump and Democratic Party nominee Joe Biden on Oct. 15.

“President Trump was discharged from the hospital,” Hu Xijin, the editor-in-chief of China’s hawkish state-run newspaper Global Times, posted on Chinese social media Weibo. “It’s hard to say that his case can be a model example of [the United States] fighting the coronavirus, because the treatment he received is something an ordinary American can’t access at all.”

Hu’s opinion parroted those of other Chinese officials. Hua Chunying, China’s foreign affairs ministry’s spokeswoman, posted on Twitter that she hoped all U.S. patients could receive the same “finest” treatment and care as Trump.

Hu and Hua’s posts both were criticized by Chinese and other netizens.

In addition, hundreds of netizens noted the privilege that Chinese officials enjoy, and complained about how difficult it was for ordinary Chinese to get hospital treatment due to the high costs and limited capacity—which would have prioritized Party officials.

In response to Hua’s tweet, users also criticized the unfair treatment in China, while noting the irony of Hua’s use of Twitter, a platform that is banned inside China.

Eilwek posted: “Twitter and Facebook are banned in China. But the CCP spokesperson is using them to speak to the world. Hypocrite to the max.”

Krishna Prasanth urged Hua: “Stop spreading the viruses across the world. Everyone will be more than happy.”

Netizen Shanye Zhiren posted a video that purports to show a patient jumping off a building at the First Hospital of Harbin Medical University in northeastern China’s Harbin city. Shanye said the patient killed himself because he was too poor to afford the hospital bill.