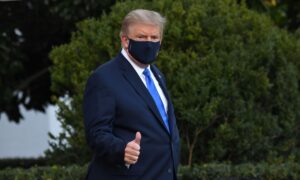 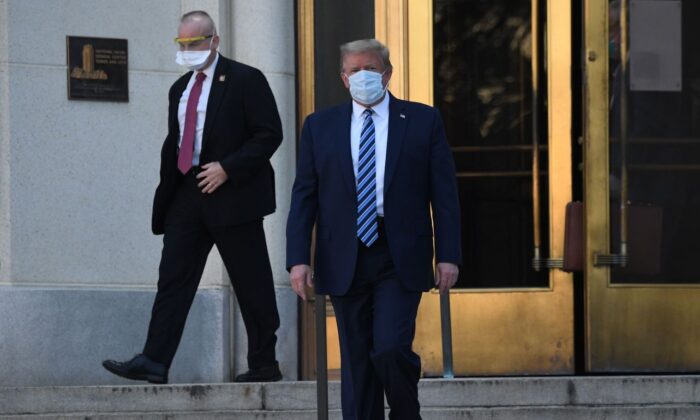 Photos showed Trump’s motorcade leaving the facility at around 6:30 p.m. ET. The departure came several hours after Trump announced he would be leaving, while his doctors told a news conference that his condition has improved enough to allow him to return back to the White House.

Before his departure, the president wrote he “will be back on the campaign trail soon.” When he left, Trump only told reporters: “Thank you very much.”

About 30 minutes later, Trump was seen at the White House, taking off his mask.

In an announcement earlier in the day that was posted to Twitter, the president said he is “feeling really good,” calling on Americans to not “be afraid of COVID,” referring to COVID-19, the disease caused by the CCP (Chinese Communist Party) virus.

“Don’t let it dominate your life,” Trump wrote. “We have developed, under the Trump Administration, some really great drugs & knowledge. I feel better than I did 20 years ago!”

“He’s back,” White House physician Dr. Sean P. Conley said at a news conference earlier Monday. “The president has been a phenomenal patient since he has been here.

“He has never pushed us beyond safe and reasonable practice,” he added.

Trump, 74, has not had a fever in more than 72 hours and his oxygen levels are normal, his medical team said in a briefing in front of the hospital. The team added that the president had received supplemental oxygen twice in recent days. The doctors declined to offer more information.

Doctors also have been treating him with a steroid, dexmethasone, as well as other medications.

After he is discharged and returns to the White House, Trump will need to continue treatment as he is still undergoing a five-day course of the intravenous antiviral drug, remdesivir, and will have to isolate himself for a certain period of time.

On Sunday evening, Trump was seen driving by supporters outside Walter Reed hospital. Clad in a mask, the president was seen waving while riding in an SUV along with Secret Service agents and other staff.

UPDATE from Walter Reed: THANK YOU all for the prayers and support. The docs have been fantastic and @realDonaldTrump has made tremendous progress since Friday. He’s in strong spirits, feeling great and as usual he won’t stop working. Thrilled he’s been cleared to return home!

Meanwhile, First Lady Melania Trump wrote on Monday that she is “feeling good” and will rest in the White House.

“My family is grateful for all of the prayers & support! I am feeling good & will continue to rest at home,” Melania Trump wrote. “Thank you to medical staff & caretakers everywhere, & my continued prayers for those who are ill or have a family member impacted by the virus.”

Democrat presidential nominee Joe Biden, who previously wished Trump well last week, called on the president to “listen to the scientists” and support a nationwide mask mandate, according to his remarks at a news conference on Monday.