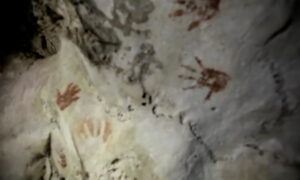 The demise of the dinosaurs, thought to have been caused by an asteroid, wasn’t the only mass extinction around that time, according to new international research.

Evidence suggests that many species of ocean organisms were killed by volcanic eruptions before the asteroid impact. The eruptions took place in India, filling the atmosphere with greenhouse gases that warmed the globe and caused seafloor life to die.

“The eruptions started 300,000 to 200,000 years before the impact, and they may have lasted 100,000 years,” said study lead author Thomas Tobin at the University of Washington in a press release.

The scientists discovered this earlier extinction when they studied fossils from Seymour Island near Antarctica. The island has an unusually thick bed of sediment, where more sediment than normal accumulated in each time period.

This allowed the researchers to date fossils more precisely and create a detailed timeline. They used the prehistoric changes in Earth’s magnetic field to date each fossil sample.

“I think the evidence we have from this location is indicative of two separate events, and also indicates that warming took place,” said Tobin.

“It seems improbable to me that they are completely independent events.”

The first extinction event may have seriously affected some species, making them unable to survive the second extinction, although there’s no evidence for this yet.

The volcanic eruptions killed off species of snails and clams that lived on the ocean floor. The asteroid that followed destroyed more sea life as well as the dinosaurs.

“The species in the first event are extinct, but the groups are all recognizable things you could find around on a beach today,” said Tobin.

The paper will be published in the Sept. 15 issue of the journal Palaeogeography, Palaeoclimatology, Palaeoecology.