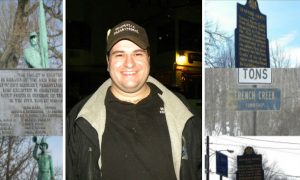 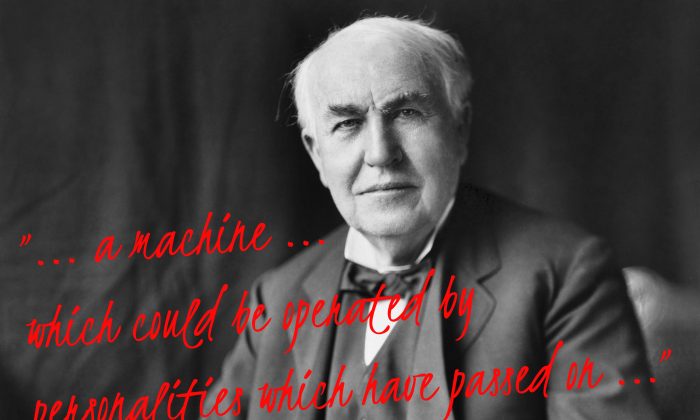 Thomas Edison spoke of working on a machine that could communicate with the dead. Did he impart his design after his own death? (Library of Congress; edited by Epoch Times)
Good to Know

Famed inventor of the light-bulb, phonograph, and other devices, Thomas Edison is said to have invented a machine that allows the dead to communicate with the living. He is quoted in the 1920 issue of The American Magazine as saying: “I have been at work for some time building an apparatus to see if it is possible for personalities which have left this Earth to communicate with us.”

He is quoted by Scientific American in the same year as saying: “I have been thinking for some time of a machine or apparatus which could be operated by personalities which have passed on to another existence or sphere.”

Though no prototypes or schematics were ever found, some say Edison imparted his design to a group of researchers after his death. Over the course of five years in the 1990s, the so-called Scole Experiment purportedly produced many outstanding results in terms of physical mediumship and afterlife communication—including a message from the long-dead Edison outlining the design of his machine.

Dr. David Fontana, former Society for Psychical Research (SPR) president and professor of psychology at Cardiff University, was present during the sessions in Scole, a small village in Norfolk, UK. He said that he was among many investigators who witnessed the paranormal manifestations; engineers, mathematicians, an astrophysicist from NASA, and other experts also attended, he said. They heard voices, felt invisible hands touching them, saw lights, and more.

“It’s rather like a bundle of sticks. You might break one stick, but if you put a bundle together, it becomes harder and harder to break it,” Fontana said in the documentary “This Life, Next Life.” So many forms of manifestation appeared all at once, repeatedly over time, and the rooms in which the experiments took place had been searched before and after for signs of fraud. Fontana said the SPR has challenged magicians, conjurers, and anyone else who’s game to duplicate the multiple signs of spirit presence witnessed during the Scole Experiment. None have met the challenge.

Unexposed reels of film were kept in a sealed box during the experiment. When the film was developed by investigators, they found images purportedly imprinted by spirits. This is how Edison allegedly provided his design. A sketch of a machine, along with some instructions, was printed on the film. When the machine was first built, it didn’t work. But, after the first failure, another communication came through adding two coils to the design. This second communication was signed with the initials TAE. Thomas Alva Edison’s signature matched the initials on the purported spirit communication, according to the Edison Foundation.

The signature from the film had been sent to the foundation without any explanation of its origin. The foundation confirmed it matched Edison’s signature, explained the documentary’s host Keith Parsons.

With the new design, the SPR members who built the machine said they received a message when they plugged it into an amplifier in January 1997: “It is hoped in the future this system will enable us to communicate with distant dimensions. Many people here feel as I do, that this work is of the utmost importance to mankind, and therefore are willing to put their hearts into these experiments.”

One Man’s Fascinating Quest to Understand a Spooky Phenomenon

Since then, others have built machines according to this design and have also reported receiving messages. Some who have tested it at home have shared their audio files, photos, and design tweaks on the ITCBridge.com forum, a forum for researchers and others interested in Instrumental Transcommunication (ITC, communication with spirit beings through devices).

One experimenter on the ITC Bridge forum said his home-made machine was a success: “I received the words ‘Hey Mark’ from an American sounding woman!” Another said he heard “Welcome” and “Devil play.”