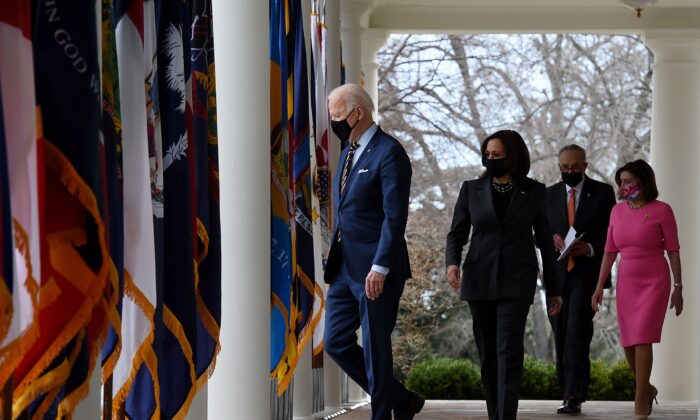 Democrats in both the legislature and the White House have few options open to them to counter the Supreme Court’s (SCOTUS) expected decision to overturn Roe v. Wade, despite efforts to use legislation or executive powers to do so.

In 1973’s Roe v. Wade, SCOTUS ruled that abortion was protected under the Constitution by an implied right to privacy.

The court declared that states were required to permit abortion at least through the first trimester, effectively overturning existing abortion laws in over two dozen states. Since then, conservative and pro-life activists have worked frantically to overturn the decision, which they say relies on a bad legal ruling.

According to a draft opinion leaked by Politico, SCOTUS is poised to do just that in Dobbs v. Jackson Women’s Health Organization. Later confirmed as true by Chief Justice John Roberts, the opinion would mark a monumental shift in U.S. abortion law if approved for the final draft, and could set the stage for the reconsideration of other rulings relying on an implied right to privacy.

For Democrats and pro-abortion advocates, the decision is a nightmare scenario, and since the story first broke they have been scrambling to find ways to counter the decision, turning an eye to both a legislative decree or an executive action.

However, due to the current makeup of Congress, and due to limitations on the power of the executive branch, few options appear available to Democrats, who will likely have no way to counter the decision if it is the final ruling.

Following the leak, Speaker of the House Nancy Pelosi (D-Calif.) and Senate Majority Leader Chuck Schumer (D-N.Y.) said that they would again bring legislation to the floor on May 11 that would codify the Roe standard. But this bill is unlikely to fly in the Senate, where 60 votes are needed before a bill can come to the floor for a final simple majority vote.

The same bill, called the Women’s Health Protection Act (WHPA), was passed through the House in November following the SCOTUS decision to allow a Texas abortion law to stand unchallenged. Only Rep. Henry Cuellar (D-Texas), one of the few pro-life Democrats in Congress, joined with Republicans to vote against the bill.

However, in the Senate it faced steeper hurdles, needing to overcome the 60-vote filibuster threshold to be able to pass.

Amid solid GOP opposition to the bill, in addition to Sen. Joe Manchin’s (D-W. Va.) opposition, the bill predictably failed to make it to President Joe Biden’s desk.

Now, Democrats have made some tweaks to the WHPA, which would effectively prohibit any state-level restrictions on abortion.

The original 2021 draft of the bill used controversial terms like “reproductive justice,” and called the bill a fight against “white supremacy.”

That draft of the bill also included controversial gender ideology.

In the revised version, these more left-wing departures from abortion have been removed—but the bill is still unlikely to fly with GOP senators.

In the newly revised 2022 version, the word “woman” is notably absent.

Swing-voting Sen. Lisa Murkowski (R-Alaska), who was one of only a few Republicans to vote to confirm Judge Ketanji Brown Jackson to SCOTUS earlier this year, said during debates over the 2021 draft of the bill that while she supports allowing some abortions, the WHPA “goes too far.”

Manchin, for his part, has given no indication on whether he’ll support the bill.

However, while other Democrats raced to Twitter to decry the decision following the leak, Manchin has yet to comment about it on his own lawmaker page, suggesting that he may not be as put out by the decision as some of his colleagues.

Even if Manchin were to join his party, Democrats would need to win the support of at least 10 GOP senators—a tall order in a party whose voters are generally opposed to the 1973 ruling.

Thus, the party is unlikely to make any headway with such a bill in the legislature during this session of Congress.

Biden Suggests Action, But His Powers Over Roe Are Limited

With the WHPA all but doomed to failure in the Senate, some Democrats are eying executive action by President Joe Biden—but there is little the president can do to override a decision by the nation’s highest court, which has almost unilateral control over which laws are constitutionally allowed to be enforced.

In a statement issued before the confirmation that the draft opinion was legitimate, Biden said that the White House was unsure of its authenticity but reaffirmed his administration’s efforts to argue in support of Roe v. Wade.

“I believe that a woman’s right to choose is fundamental, Roe has been the law of the land for almost fifty years, and basic fairness and the stability of our law demand that it not be overturned,” Biden said.

The statement also notes the administration’s efforts to prepare to respond to state-level laws limiting abortions saying, “we will be ready when any ruling is issued.”

However, it is unclear what routes Biden could take to respond to the decision.

Asked whether there were any actions Biden could undertake to codify Roe v. Wade, John Malcolm, a constitutional scholar at the Heritage Foundation, told The Epoch Times that the options would be extremely limited in scope.

“He might be able to issue some executive order about what happens on federal properties or federal military bases,” Malcolm said.

“I don’t know how extensive beyond that he could go,” he added, explaining: “The president has some control over what happens on federal lands. Any executive order would have to be linked to some congressional delegation of authority or it would have to be part of the president’s explicit or inherent executive authority under Article II [of the U.S. Constitution].”

“I’m not sure what he would be relying upon to do that,” Malcolm concluded. “He would clearly have limited authority but he might have some.”

Still, finding a legal precedent that would enable the Biden administration to overrule the decisions of over a dozen state legislatures seems like a tall order, and one that would be unlikely to withstand the courts.

Even the White House seemed to admit as much in its conclusion to the statement, which called for legislation codifying Roe v. Wade should its ruling be overturned.

“It will fall on our nation’s elected officials at all levels of government to protect a woman’s right to choose,” the statement reads.

The Democrats’ bill to do just that is set for a vote tomorrow, but given the makeup of Congress the effort is unlikely to ever make it to the president’s desk.