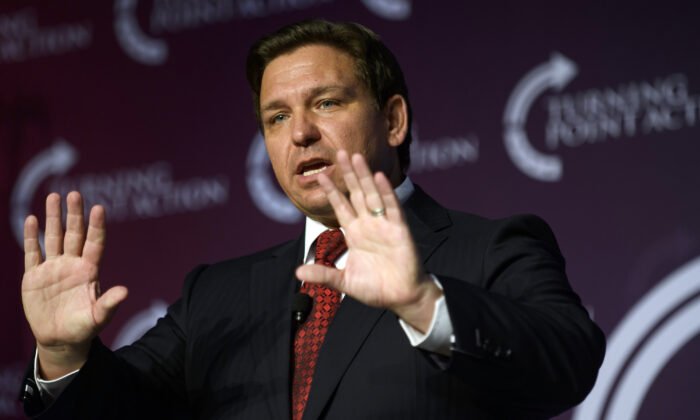 Florida Gov. Ron DeSantis says Republicans have been too soft on big business and that the GOP shouldn’t shy away from taking on major corporations if it means advancing conservative goals and defending American values.

DeSantis, who made the comments at the National Conservatism Conference in Miami on Sept. 11, has taken a range of actions that involve pushing back on progressive policies in the workplace. They include signing the “Stop WOKE Act,” which seeks to combat “woke indoctrination” in Florida schools and businesses.

The Republican governor has also called out Walt Disney Co. for profiting off China while ignoring the Beijing regime’s long record of human rights abuses.

He also dissolved the self-governing status of Walt Disney World in central Florida, after the company issued a statement that was critical of the Parental Rights in Education bill that DeSantis backed and signed into law, which bans teachers from instructing about sexual orientation and gender identity topics to children in kindergarten through the third grade.

In an hourlong speech at the JW Marriott Miami Turnberry Resort, DeSantis said that his experiences in taking a stand against progressivism in schools and businesses provide lessons for how conservatives can challenge the power of corporations.

“Some of these big companies are now exercising quasi-public power,” he said.

“Corporatism is not the same as free enterprise, and I think too many Republicans have viewed limited government to basically mean whatever is best for corporate America is how we want to do the economy.

“What I’m doing is using government to give space to the individual citizen to be able to participate in society, to be able to speak his or her mind.

“And I think that’s an absolutely appropriate use of government power.”

While he continues to view free enterprise as the “best economic system,” DeSantis said it should be viewed as a means to an end.

“It’s a means to having a good fulfilling life and a prosperous society. It’s not an end in and of itself,” he said.

DeSantis also took aim at elitism more broadly in the context of COVID-19 policies, such as lockdowns.

“We rejected the elites, and we were right,” he said, according to Daily Caller.

DeSantis vowed to continue to fight for conservative values and to oppose progressive policies.

“Just because the media and the elites are saying to do something, that doesn’t mean it’s the right thing to do,” he said.