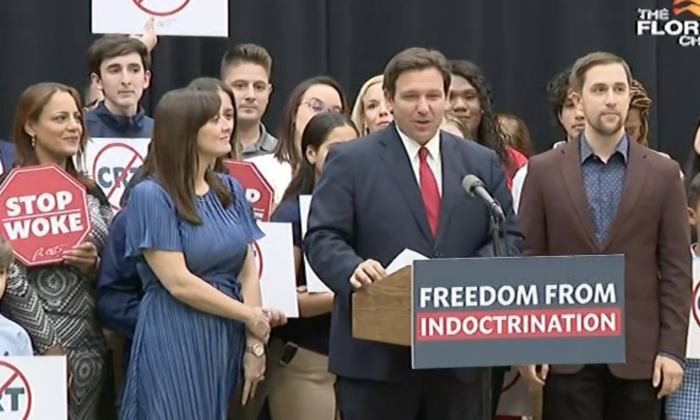 PUNTA GORDA, Fla.–Gov. Ron DeSantis signed the Stop Woke Act in Hialeah Gardens on April 22 to restrict ideological indoctrination and training in schools and in the workplace.

HB 7, or what the Republican governor called the Stop Wrongs Against Our Kids Act, was passed during the 2022 legislative session and signed by the governor. It will prohibit the teaching of Critical Race Theory, but will also require corporations to keep it out of the workplace.

“An important component of freedom in the state of Florida is the freedom from having oppressive ideologies imposed upon you without your consent, whether it be in the classroom or the whether it be in the workplace,” DeSantis told the cheering crowd. “We decided to do something about it.”

When the bill passed in March, it was designed to prohibit Critical Race Theory (CRT) from being taught in schools or used in employee training sessions, according to the bill’s sponsor, Republican state Senator Manny Diaz Jr.

He said the bill was designed to protect individual freedoms in the workplace and would prohibit employers from subjecting employees to any type of certification process, examination, or any other “required activity” that is centered on any number of race-related concepts.

DeSantis cautioned during the legislative process that CRT could create a “hostile working environment.”

“Disney Corporation claimed that America was founded on ‘systemic racism’ and encouraged employees to complete a ‘white privilege checklist,'” DeSantis told the crowd. “Under this law, that is a violation of your civil rights.”

Under the new law, he said, there will be “substantive protections” for schoolchildren and employees.

Christopher Rufo, a senior fellow and director of the initiative on CRT at the Manhattan Institute, who DeSantis credits as exposing CRT in schools, was in attendance and spoke to the crowd.

“Parents don’t want their kids segregated on the basis of race; I don’t want my kids being told that they’re either forever doomed to feel guilt and shame because of their skin color or have no opportunity and no possibility of success in the United States,” he said.

He also warned the company that “come Monday,” if the corporation is still promoting CRT as part of the human resources program, “there will be consequences.”

A Hillsborough County mother and Army veteran, Alysha Legge, took to the podium with a message of her experience with CRT having been “injected into the children’s curriculum” at school.

“These teachers had no right to push their ideologies onto my children,” she said. “It should not have happened in the first place. Their job is to teach reading, writing, science, and math. Everything else is up to me and their father.”

Legge said that her oldest child had been asked to “denounce” the father who had “raised him” since the age of 3, based on the fact that he “is white” and “without his black father.”

“We are all shades—all humans are all shades of the human skin tone,” she said. “This is demoralizing psychologically and emotionally damaging; critical race theory is racist at its core.”

Florida’s Lt. Gov. Jeanette Nunez said that CRT reminded her of a country she and her parents escaped from in 1961—”communist Cuba.”

“By signing this legislation, which is the first in the nation to end corporate wokeness and Critical Race Theory in our schools, we are prioritizing education not indoctrination,” said Nunez. “We will always fight to protect our children and parents from this Marxist-inspired curriculum.”

Florida’s Lottery Secretary John Davis, who played football for Florida State University, said that education is the “cornerstone to success.”

“CRT (who) would have you believe that a black kid like myself from the village projects of Pahokee couldn’t have a chance to succeed,” he said.

“This mindset is far from the truth, and it doesn’t belong in our classroom.”

The governor’s office issued a written statement outlining the bill.

“HB 7 protects civil rights in employment and K-20 education by specifying that subjecting an employee or student to a required activity that promotes, advances, or compels individuals to believe discriminatory concepts, constitutes unlawful discrimination.”

Concepts that constitute “unlawful discrimination” include the following:

The bill addresses instructional materials and professional development requiring adherence to principles of “individual freedom” outlined in the bill, including racism, sexism, or oppressiveness based on the “virtue of race or sex.”

The bill “authorizes discussion” of topics in an “age-appropriate manner that does not indoctrinate or persuade students to a certain point of view. These topics include sexism, slavery, racial oppression, racial segregation, and racial discrimination.

Schools are “required to teach factual information” related to African American history and the Holocaust instead of “subjective indoctrination that pushes collective guilt.”