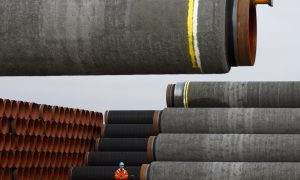 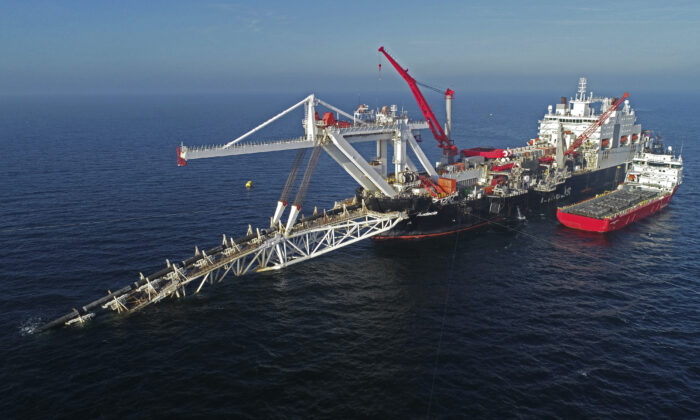 A ship works offshore in the Baltic Sea on the natural gas pipeline Nord Stream 2 from Russia to Germany on Nov. 11, 2018. (Bernd Wuestneck/dpa/AP)
Economy

Denmark’s Energy Agency has ruled that the developers of the Nord Stream 2 gas pipeline project may use pipelaying ships equipped with anchors to recommence construction of the controversial project. An earlier permit foresaw the use of self- or dynamic-positioning vessels that would not disturb the floor of the Baltic Sea, which is strewn in some areas with chemical weapons dumped there after World War II.

“If the sanctions are actually enforced, neither the completion nor the commissioning of the pipeline will be possible as things stand today,” said Dr. Timm Kehler, Chairman of the German industry initiative Zukunft ERDGAS on July 1.

“Nord Stream 2 threatens Ukraine, Europe’s energy independence and gives Russia an opening to exploit our allies. Congress must once again take decisive action and stand in this pipeline’s path,” Shaheen said in a statement.

Just under 100 miles of the 764-mile pipeline have yet to be completed, and the Danish Energy Agency says that slower, sea floor-anchored pipe-laying vessels are capable of laying from 0.5 to 0.6 miles of pipe per day. According to the agency, “the remaining part of the pipelines to be constructed in Denmark is outside the area where bottom trawling, anchoring, and seabed intervention are discouraged due to the risk posed by dumped chemical warfare agents.”

In the decision, the agency said that under the UN Convention on the Law of the Sea, “Denmark is obliged to allow the construction of transit pipelines.” The decision is open to appeal until August 3.

The Trump administration imposed sanctions last July on companies laying the final section of pipeline off the coast of Denmark, as Nord Stream 2 would bypass Ukrainian transit pipelines and supply Russian gas directly to Germany. The initial round of U.S. sanctions prompted Swiss pipe-laying specialists Allseas to withdraw their ships from the project, bringing pipeline construction to a standstill.

The U.S. government expressed its opposition to the project through the Protecting Europe’s Energy Security Act (PEESA) of 2019. The Bureau of Energy Resources at the Department of State claims that the pipeline would increase European reliance on Russian gas, making America’s European allies economically and politically vulnerable to the weaponization of Russian gas supplies.

In addition, “Nord Stream 2 is a tool Russia is using to support its continued aggression against Ukraine,” according to a statement from the State Department. “Russia seeks to prevent it from integrating more closely with Europe and the United States. Nord Stream 2 would enable Russia to bypass Ukraine for gas transit to Europe, which would deprive Ukraine of substantial transit revenues and increase its vulnerability to Russian aggression.”

According to Sen. Cruz, “Nord Stream 2—if completed—would generate billions of dollars for (Russian President) Putin that would fund Russian military aggression.”

Preempting the resumption of pipe-laying made possible by the Danish decision, the Protecting Europe’s Energy Security Clarification Act of 2020 (pdf) was introduced on June 4 and provides for the clarification and expansion of sanctions against firms aiding in finishing the project.

The new legislation serves to clarify that U.S. sanctions apply to vessels engaged in pipelaying, as well as to persons and companies facilitating the provision of such vessels. Other services subject to the expanded sanctions include associated pipelaying services such as the provision of insurance, port facilities, retrofitting or tethering services, and pipeline certification services.

According to S&P Global, German Chancellor Angela Merkel said last week that it was “right” to complete the pipeline, and that the United States and Germany differ in their interpretation of relevant international law.

“We believe that the type of extraterritorial sanctions imposed by the U.S. is not in line with our understanding of the law,” Merkel said.

“We have to concede, however, that this will make the construction process more difficult,” she said. “Nevertheless, we believe that it is right to complete this project, and we are acting in this spirit.”

Merkel has previously poured cold water on the idea that the pipeline could negatively affect Ukraine’s international bargaining position, or increase German reliance on Russian gas.

“A Russian gas molecule is a Russian gas molecule, whether it comes via Ukraine or via the Baltic Sea,” Merkel said during a speech at the Munich Security Conference in 2019. “That means that the question of how dependent we are on Russian gas cannot be resolved by asking which pipeline it flows through.”