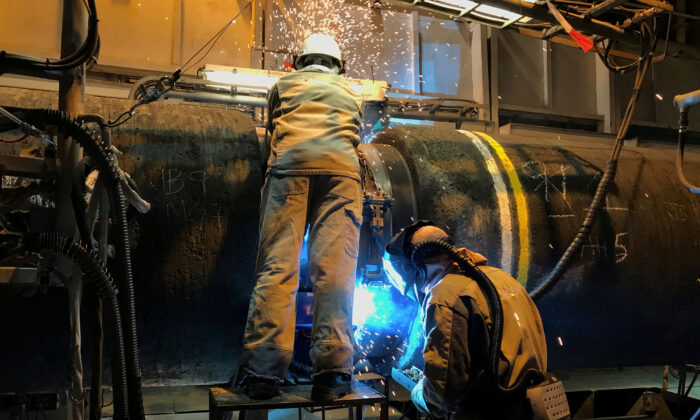 The United States sanctioned Russia over its Nord Stream 2 gas pipeline, although Russia is vowing to move forward with the project.

The $10.5 billion pipeline is slated to run from Russia to Germany under the Baltic Sea, parallel to an existing pipeline.

The sanctions were part of the National Defense Authorization Act (NDAA), which President Donald Trump signed on Dec. 20. The measure requires administration officials to report to Congress about vessels that lay pipe “at depths of 100 feet or more below sea level for the construction of the Nord Stream 2 pipeline project” or the TurkStream pipeline project, as well as individuals who have provided such vessels or facilitated transactions to provide the vessels, opening up the individuals and companies to sanctions.

The goal, according to the act, is to “minimize the ability” of Russia to use Nord Stream 2 “as a tool of coercion and political leverage” and to stop Russia from shifting energy exports from Ukraine to other countries.

“Completing the project is essential for European supply security. We, together with the companies supporting the project, will work on finishing the pipeline as soon as possible,” it said in a short statement.

Allseas Group SA, a Swiss-based contractor that was building the pipeline for a group of Russian companies headed by Gazprom, said Dec. 21 it was suspending work on the project, The Wall Street Journal reported. The sanctions would punish any companies working on the project.

A spokeswoman for German Chancellor Angela Merkel said that U.S. sanctions amounted to “extraterritorial sanctions that affect German and European companies and interfere in our internal affairs,” and senior aides to Merkel said that Russia would finish the pipeline despite the setback.

The project is about a month from being finished, an Allseas spokesman said.

Kremlin spokesman Dmitry Peskov previously told Reuters that sanctions against the pipeline are a breach of international law and an example of unfair competition and that the Russian government expects the project to be completed.

U.S. lawmakers had claimed that the sanctions would prevent Russia from completing the pipeline.

“This provision sends an unmistakable, bipartisan message from Congress to Vladimir Putin that the United States will not sit idly by while the Kremlin seeks to further spread its malign influence,” said Sen. Jeanne Shaheen (D-N.H.), co-sponsor of the bill that was folded into the NDAA, in a statement this week. “The Nord Stream 2 project threatens Ukraine, Europe’s energy independence, and gives Russia an opening to exploit our allies.”

“Projects such as the Nord Stream 2 pipeline are a threat to European energy security and a provocation by the Russian government. Imposing sanctions that will prevent the completion of the Nord Stream 2 pipeline is an important tool to counter Russia’s malign influence and to protect the integrity of Europe’s energy sector,” added Sen. Jim Risch (R-Idaho), chairman of the Senate Foreign Relations Committee, in a statement.

Richard Grenell, the U.S. ambassador to Germany, said that the United States “stands with the 15 European countries, the European Parliament, and the European Commission who have concerns over Nord Stream 2.”

“Our position is pro-Europe,” he said in a statement about the sanctions.