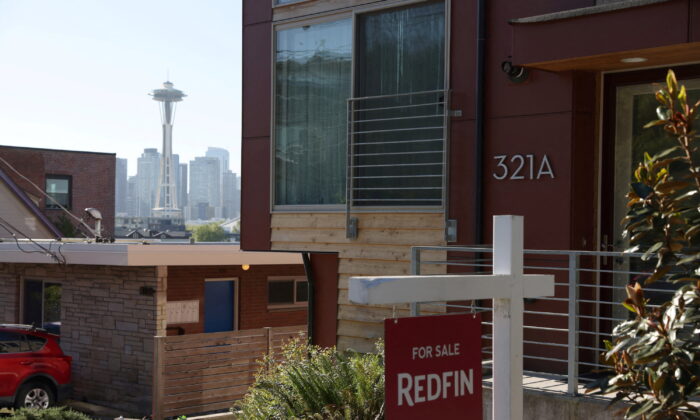 A "For Sale" sign is posted outside a residential home in the Queen Anne neighborhood near the Space Needle in Seattle, Washington, on May 14, 2021. (Karen Ducey/File Photo/Reuters)
US Real Estate

Mortgage applications for home purchases rose 8 percent over the week ending June 17 compared with the week before, in part because of rising demand for adjustable-rate mortgages, according to the Mortgage Bankers Association’s June 22 seasonally adjusted index.

“Purchase applications increased for the second straight week—driven mainly by conventional applications—and the [adjustable-rate mortgage] share of applications jumped back to over 10 percent,” wrote Joel Kan, the association’s associate vice president of economic and industry forecasting.

“The average loan size, at just over $420,000, is well below its $460,000 peak earlier this year and is potentially a sign that home price-growth is moderating.”

Meanwhile, mortgage loan application volume increased 4.2 percent on a seasonally adjusted basis from one week earlier, but is still 10 percent lower than in the same week of 2021.

“All other loan types also increased by at least 20 basis points, influenced by the Federal Reserve’s 75-basis-point rate hike and commentary that more are coming to slow inflation,” said Kan.

“Mortgage rates are now almost double what they were a year ago, leading to a 77 percent drop in refinance volume over the past 12 months,” he said.

The refinance index, which covers home loan applications, fell 3 percent from the previous week and was 77 percent lower than the same week a year ago.

Adjustable-rate mortgages are offered at a lower rate of interest and are generally fixed for terms of five, seven, or 10 years.

About one in five home sellers have already slashed prices in the four-week period ending May 22, according to Redfin, but Freddie Mac reported that single-family home prices are still expected to rise at 10 percent pace in 2022 and by 5 percent in 2023, as the housing supply remains tight.

Demand for housing still remains strong nationwide, alleviated by a recent boost in the supply of available housing stock, with active inventory up by 17 percent over the same time in 2021.

The rapid rise in mortgage rates may actually encourage homebuyer demand, as consumers worried about higher rates in the near future try to acquire properties before they go up.