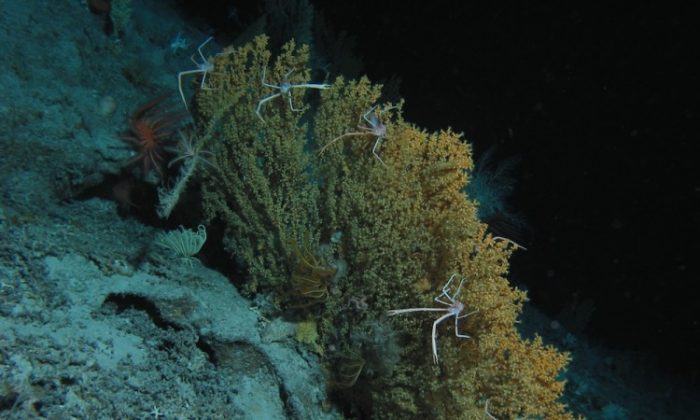 Bioluminescence of the colonial zoantharian Gerardia sp., a key species at the site. (Duke University)
Science

Some marine animals that dwell in dark habitats about half a mile below the surface can see blue and ultraviolet light. New research shows they could be using this ability to distinguish edible plankton from poisonous corals.

Two new U.S. studies of crustaceans from ocean-floor sites near the Bahamas looked at three deep sites to find out what they eat as well as the bioluminescent colors of neighboring animals.

The researchers also caught eight species of crustaceans, and tested their vision with microelectrodes and colored lights.

“Call it color-coding your food,” said study co-author Sönke Johnsen at Duke University in a press release, adding that this sensitivity could “sort out the likely toxic corals they’re sitting on, which glow or bioluminesce blue-green and green, from the plankton they eat, which glow blue.”

The team found that all the species can detect blue light, and two crab species can also detect ultraviolet via separate light-sensing channels. They also discovered that the corals have a greenish glow, whereas the plankton glow blue.

“Sometimes these discoveries can also lead to novel and useful innovations years later,” such as an X-ray telescope based on lobster eyes, said study lead author Tamara Frank at Nova Southeastern University in the release.

Using a digital camera on a submarine, the researchers observed the crabs sitting on a coral-like animal called a sea pen, and regularly picking off something to eat, suggesting that they use a basic color code to feed.

More crabs need to be collected to test this hypothesis, and it is not clear whether filming the crabs alters their normal behavior.

“Our subs, nets, and remotely operated vehicles greatly disturb the animals, and we’re likely mostly getting video footage of stark terror,” Johnsen said. “So we’re stuck with what I call forensic biology.”

“We collect information about the animals and the environment and then try to piece together the most likely story of what happened.”

The papers were published in the Journal of Experimental Biology on Sept. 6. They can be accessed here and here.