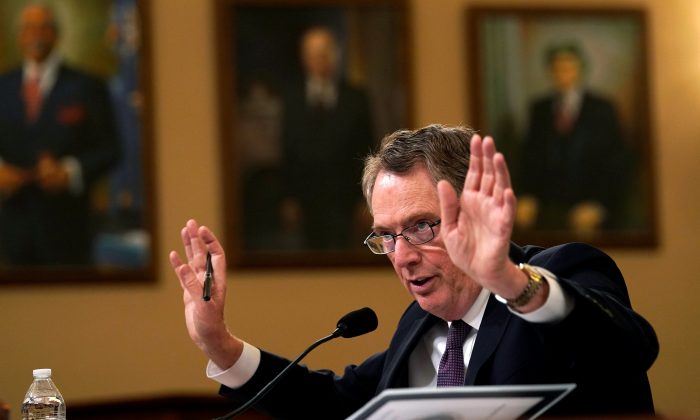 Deal or No Deal, US-China Trade Talks May End in Weeks: Lighthizer

WASHINGTON—The United States and China may be in the final weeks of discussions to hammer out a deal to ease their tit-for-tat tariffs dispute, U.S. Trade Representative Robert Lighthizer said on March 12.

Washington and Beijing have slapped import duties on each other’s products that have cost the world’s two largest economies billions of dollars, roiled markets and disrupted manufacturing and supply chains.

The U.S. government is pressing for an end to practices and policies it argues have given Chinese firms unfair advantages, including subsidizing of industry, limits on access for foreign companies and alleged theft of intellectual property.

“Our hope is we are in the final weeks of having an agreement,” Lighthizer, the top U.S. trade official, said during a U.S. Senate Finance Committee hearing on Tuesday, though he cautioned that major issues remained.

“If those issues are not resolved in favor of the United States, we won’t have a deal.”

Lawmakers pressed Lighthizer for details on whether the Trump administration intends to keep its tariffs in place to ensure China is complying with any agreement.

“The focus of the negotiation from the Chinese side is the removing” of the U.S. tariffs, Lighthizer said. “If that is a concession, that is something that is under debate.”

The United States is addressing structural issues over intellectual property rights “with precision” in the talks and is nearing a deal to address currency manipulation, he added.

Progress in negotiations last month drove the White House to indefinitely delay hiking tariffs on $200 billion worth of Chinese imports that were set to kick in on March 2. That led to mounting expectations a deal was in the offing, though Trump administration officials said on Friday another face-to-face meeting was not yet scheduled.

Lighthizer and China’s top trade negotiator, Liu He, spoke on Tuesday, China’s state media reported, and the U.S. trade representative said during the Senate hearing that he had another call scheduled on Wednesday.

“We are working more or less continuously,” Lighthizer said.