De Las Casas and the 500-Year Struggle for Liberty 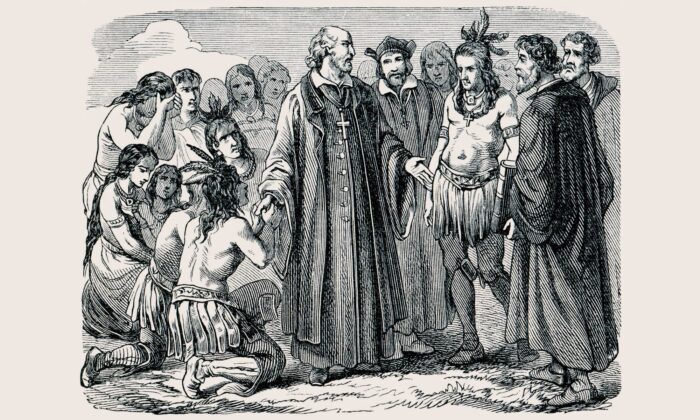 Bartolomé de las Casas, in the book "History of the Church," circa 1880. (Sergey Kohl/Shutterstock)

Spending the holiday week in gorgeous Mexico City has sent my mind reeling with reflection on the great struggle of all time, that for universal rights and liberties and against all forms of tyranny. The beauty of visiting a place like this is that this history is utterly inescapable.

One only needs to visit the city center with the ruins of the Templo Mayor, which was the crowning glory of the Aztec empire. Its construction began in 1325 but was reduced to rubble by Spanish conquistadors in 1521. In its place was built an enormous cathedral—it took fully 200 years to build!—that still stands in all its beauty and majesty today. It is the first great cathedral built in the New World, which was really a very old world with ancient roots.

Most of the history we know from the Aztec empire at its height comes of course from Spanish sources, which describe some of the most horrific violations of human rights done in the name of religion that one can imagine. The evidence of the ubiquity of human sacrifice is everywhere evident in the museum—the sharp stone knives, the images of bloody hearts, the screaming—and it is impossible not to be appalled.

At the same time, the Spanish conquest of Latin America itself was a brutal undertaking, characterized by murder, pillaging, and horrifying enslavement, all of which persisted from the time it began until a more humane approach began with the papal bull of Pope Paul III of 1537. This hinge of history took place nearly a quarter of a millennium before Thomas Jefferson’s great Declaration of Independence, which finally made the point in the clearest possible way.

The twenty-five year period between the arrival of the Europeans in Mexico and the Pope’s proclamation had two major themes: first, mass death from the smallpox that Europeans brought to the immunologically naïve native population, and, second, the struggle to recognize their human rights.

The problem of smallpox no mortal man could fix absent vaccines, which had not yet been discovered. That would come about two hundred fifty years later. Eventually smallpox, that evil killer, was eradicated in one of the greatest triumphs of public health in history.

The issue of human rights, however, was fully in the hands of states and leaders to address. What was necessary was a compelling writer who could make the case. History found its man in the person of Bartolomé de las Casas (1484–1566). He was among the first of the Europeans to arrive in the New World, took up a priestly vocation, and eventually joined the Dominican Friars.

De las Casas wrote tirelessly and in great detail about the horrors of the conquests, the pillaging, the murders, the enslavement of the people, and wrote passionately for the rights of all native peoples, whom he saw as created in God’s image just as completely and thoroughly as the people of Europe.

He opposed the destruction of native writings and monuments, and forcefully argued against all abuses. Reading his work today—which you can for free—is still very much a shock. His “Brevísima Relación” chronicles appalling abuses as one empire displaced another. His argument in brief was that all peoples are created for salvation by God and endowed with the capacity to reason, understand, and choose that salvation. It thereby follows that they should be treated with dignity and granted that free choice, even if they should reject the faith for their own tradition, and thus their liberty, property, and person are deserving of protection against all invasion.

It was not so much the natives who needed to become civilized, De Las Casas wrote, but the conquistadors themselves.

His writings were an absolute scandal when they first appeared, particularly in the Americas where Spanish settlers had set up oppressive fiefdoms all over the region. He was driven out at one point but took a high position in Spanish legal and ecclesiastical circles, eventually influencing the pope to make the clearest possible statement against all forms of slavery. Thus did arrive the great statement on behalf of human rights.

“The sublime God so loved the human race that He created man in such wise that he might participate, not only in the good that other creatures enjoy, but endowed him with capacity to attain to the inaccessible and invisible Supreme Good and behold it face to face; and since man, according to the testimony of the sacred scriptures, has been created to enjoy eternal life and happiness, which none may obtain save through faith in our Lord Jesus Christ, it is necessary that he should possess the nature and faculties enabling him to receive that faith; and that whoever is thus endowed should be capable of receiving that same faith. Nor is it credible that any one should possess so little understanding as to desire the faith and yet be destitute of the most necessary faculty to enable him to receive it. Hence Christ, who is the Truth itself, that has never failed and can never fail, said to the preachers of the faith whom He chose for that office ‘Go ye and teach all nations.’ He said all, without exception, for all are capable of receiving the doctrines of the faith.

“The enemy of the human race, who opposes all good deeds in order to bring men to destruction, beholding and envying this, invented a means never before heard of, by which he might hinder the preaching of God’s word of Salvation to the people: he inspired his satel­lites who, to please him, have not hesitated to publish abroad that the Indians of the West and the South, and other people of whom We have recent knowledge should be treated as dumb brutes created for our service, pre­tending that they are incapable of receiving the catholic faith.

“We, who, though unworthy, exercise on earth the power of our Lord and seek with all our might to bring those sheep of His flock who are outside, into the fold committed to our charge, consider, however, that the Indians are truly men and that they are not only capable of understanding the catholic faith but, according to our information, they desire exceedingly to receive it. Desir­ing to provide ample remedy for these evils, we define and declare by these our letters, or by any translation thereof signed by any notary public and sealed with the seal of any ecclesiastical dignitary, to which the same credit shall be given as to the originals, that, notwithstanding whatever may have been or may be said to the contrary, the said Indians and all other people who may later be discovered by Christians, are by no means to be deprived of their liberty or the possession of their property, even though they be outside the faith of Jesus Christ; and that they may and should, freely and legitimately, enjoy their liberty and the possession of their property; nor should they be in any way enslaved; should the contrary happen, it shall be null and of no effect.”

What’s critical here is that last line: even if they are not Christians, and even if they remain outside the Christian fold, they should still enjoy all liberty and property rights and cannot be in any way enslaved. Those who say otherwise are plainly acting as enemies of the human race, which is to say that the ideas of slavery, and everything associated with it, including any violation of human rights, is of the devil.

It’s hard fully to appreciate the radicalism of such a statement today. Its influence stretch throughout Europe, influence the treatment of the native population in the Americas, and eventually made their way to form the philosophical basis to the great American project that became the United States. The influence on the founders is inescapably obvious even if inconsistently applied until the next half of the 19th century.

What’s especially striking is to realize the extent of the influence of one man, one humble but indefatigable priest, on such a dramatic turn in the history of humanity. Bartolomé de las Casas spoke with courage, moral conviction, and with profound honesty even though what he wrote opposed all the powers that be at the time. He took huge risks unto himself, forgoing all comforts and opportunities to stand for what was right and true. And though it took twenty years to get his central point across, and arguably 300 more years before his full vision came to be recognized by most governments in the world, he eventually did win the day.

As I stood within the walls of the Templo Mayor, and watched workers scrupulously digging out more and more layers of the old structure, carefully using hammers and knives to expose the original stones from under the rubble, it occurred to me that the piety and vision of De Las Casas still has a presence in this beautiful land.

The temple of the Aztecs, however brutal their religious practices, did not need to be destroyed in order for Christianity to triumph here. Spiritual conversion and social transformation can occur peacefully in a way consistent with human rights. Indeed, there is no real progress worthy of the name that is not consistent with respect for human volition.

In the sweep of history, violence, brutality, slavery, and abuse of human rights is a default position, one to which governments and peoples of the world can and do return repeatedly. Such practices are stopped, and replaced by enlightened values, by virtue of moral conviction spread through the changing of minds and hearts. In some ways, the best of the modern world was set in motion by one courageous mind who was willing to think outside the prevailing paradigm, and then speak to whomever would listen.

In the end, the truths that De Las Casas preached did prevail but the human project is always at risk of going backwards in time. We know this now better than many previous generations, simply because we’ve been witness to such horrible abuses over these last three years. Human sacrifice, backed by violent servitude, is clearly not vanquished from the earth; it only takes a different form today that it did 500 years ago.

In his time, De Las Casas watched in horror but then set out to do something about it. He wielded no sword and commanded no army but he made a lasting difference simply by speaking tirelessly in the most compelling way he could.

So must we all.