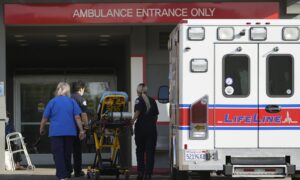 This scanning electron microscope image shows SARS-CoV-2 (round blue objects), also known as novel coronavirus, the virus that causes COVID-19, emerging from the surface of cells cultured in the lab which was isolated from a patient in the United States. (NIAID-RML/Handout via Reuters)
WORLD

Those who tested positive with the UK variant of the CCP virus are more likely to experience symptoms such as coughing than patients with the old variant, data from England suggests.

Data from hospitals, care homes, and/or other institutional settings are not included in the scope of the survey.

Among those who had a strong positive test (cycle threshold value less than 30) between Nov. 15, 2020, and Jan. 16, 2021, 52.92 percent of patients with the UK variant reported having experienced symptoms, comparing to 47.7 percent in other variants.

Patients with the UK variant are also more likely to experience classic symptoms, including cough and fever, but they are “significantly less” likely to only experience a loss of taste or smell.

The percentages of patients experiencing abdominal pain, vomiting, and shortness of breath are almost the same.

Professor Richard Tedder, senior research investigator in medical virology at Imperial College London suggested that the increase of coughs may be a reason that the UK variant is more prevalent.

“Although there is some laboratory evidence that the variant viruses, as opposed to the first wave viruses, may show an enhanced ability to infect cells in the laboratory, it is not clear how or why this may increase the infectivity and transmissibility of virus between humans,” Tedder said.

“The fact that it has been reported that the second wave viruses, usually called variants, are more likely to cause symptoms of upper respiratory tract infection, i.e. coughs and colds, may indicate that a trivial difference in the way the virus may cause disease symptoms could cause more easy transmission between people.”

Lawrence Young, virologist, and professor of molecular oncology at the University Of Warwick said the change in symptoms could be a result of the higher virus load seen in the UK variant.

“Mutations in the UK virus variant could influence the symptoms associated with infection. This variant is more transmissible and infected individuals appear to have higher virus loads which means they produce more virus. This could result in more widespread infection within the body perhaps accounting for more coughs, muscle pain, and tiredness,” he said.

“The virus has 23 changes compared to the original Wuhan virus. Some of these changes in different parts of the virus could affect the body’s immune response and also influence the range of symptoms associated with infection,” he added.