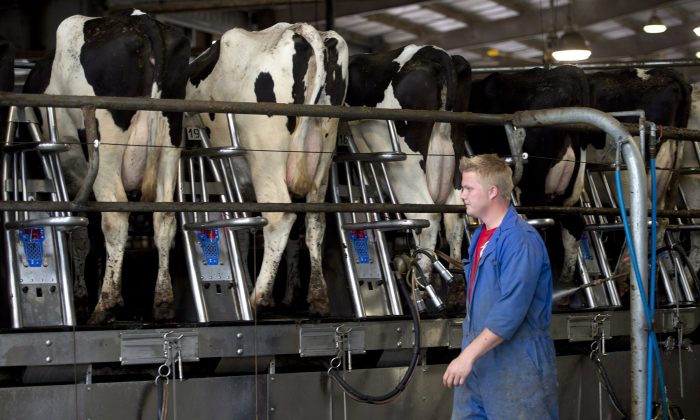 A worker keeps an eye on cows being milked at the Kooyman family dairy farm in Chilliwack, B.C., on June, 10, 2014. For the first time in 22 years, the Canadian Dairy Commission has decided to reduce the price of milk at farmgate by 1 percent. The price reductions will commence in February. (The Canadian Press/Jonathan Hayward)
Canadian Content

Dark Days Ahead for Supply Management

Dark days are ahead for supply management in Canada.

For the first time in 22 years, the Canadian Dairy Commission has decided to reduce the price of milk at farmgate by 1 percent. The price reductions will commence in February.

Under its supply management regime, established in 1966, the commission’s mandate has been to set the price of milk per hectolitre for dairy farmers owning production quotas. The new decision to reduce prices, according to the commission, is to stimulate domestic demand for milk per capita which has been decreasing for decades in Canada.

In April, Europe ends its quota system, and many producers have started to flood the market with much more milk.

As surprising as this decision may be, such a move from the commission is evidence that the dairy sector is fully aware of systemic pressures on supply management.

Big changes are coming. If ratified, the Comprehensive European Trade Agreement would allow over 17,000 tons of cheese into our country. Currently in Europe, milk is cheap, and getting cheaper. In April, Europe ends its quota system, and many producers have started to flood the market with much more milk.

There is an abundance of supply which has depressed milk prices at farmgate and retail. Prices have gone down by more than 40 percent in some regions, which makes European cheese more competitive against our own. In addition to having concealed subsidies, European cheeses have a significant competitive advantage.

As such, the commission is giving a chance for our dairy sector to compete, domestically and globally. Restaurant owners and processors alike are applauding the decision, and why wouldn’t they? This will make them more competitive, allowing them to increase margins, innovate, and recapitalize some of their infrastructure.

Most importantly, this move from the Commission is indicative that it can adapt to change, at least to a certain degree. Even if many have criticized the virtues of supply management for years, we should render to Caesar what is owed to him. Price reductions at farmgate have been uncommon in Canada due to the Commission’s lopsided cost assessment scheme. This is an audacious decision, but it should not stop there. More should be done to promote excellence and productivity in the dairy sector instead of using averages as a price setting benchmark for an entire sector.

Indeed, the commission operates obscurely, away from any media attention. In fact, more than 90 percent of Canadians are not even aware of the Commission’s role, let alone its existence, and yet its influence on our lives is real.

As for our own artisan cheesemakers who are about to face tougher competition from abroad, they are still waiting for the Harper government to provide any details on support programs. Even if Ottawa has been indefinite on this issue, the Commission’s decision is likely the help they need, at least part of it. It will certainly be welcome news and may ease the burden of increased competition.

Dr. Sylvain Charlebois is Professor of Food Distribution and Policy at the University of Guelph’s College of Business and Economics.