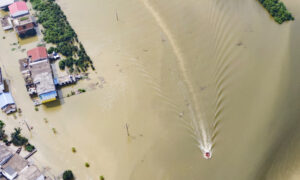 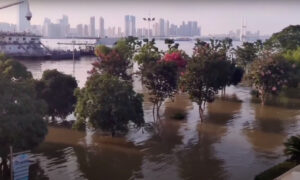 River Levels Much Higher Than Street Level in Wuhan
0
Crossroads

A second wave of floods on the Yangtze River formed on its upper reaches on July 17, and this next wave is expected to bring worse floods than the first. It’s already impacting the Three Gorges Dam, and flood discharge from the dam has intensified flooding in the middle and lower reaches of the Yangtze River. There are already 16 hydrological stations in the Dongting Lake area that have exceeded water levels; and 81 embankments have also exceeded their warning levels.

Meanwhile, the CCP has placed the capital city of Xinjiang, Urumqi, under a “wartime state” to allegedly contain the virus. Official reports claim that by July 18 there have been 17 confirmed virus cases and 23 asymptomatic cases, although numbers from the CCP have proven untrustworthy in the past.