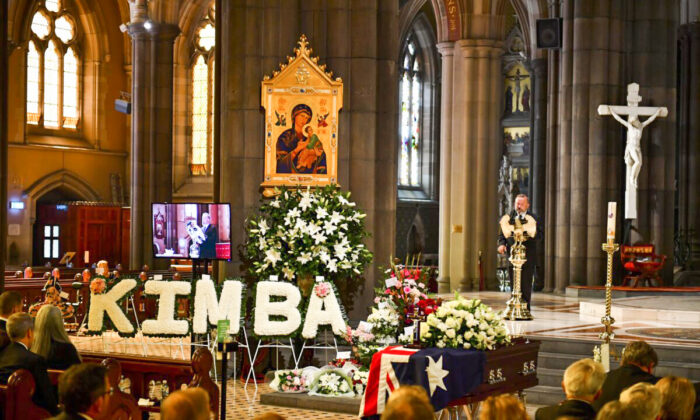 The casket is seen during the funeral service for Senator Kimberley Kitching at St Patrick's Cathedral in Melbourne, Australia, on March 21, 2022. (AAP Image/Joel Carrett)
Australia

The late Senator Kimberley Kitching has been farewelled by an assortment of political leaders from both sides of the aisle, with her widower praising her determination to protect Australia from the Chinese Communist Party (CCP).

While from the ranks of the centre-left Labor Party, those in attendance included opposition leader Anthony Albanese, deputy leader Richard Marles, close friend and former leader Bill Shorten, Victorian Premier Dan Andrews, and Senators Kristina Keneally, Penny Wong, and Katy Gallagher—the latter three are at the centre of the ongoing controversy regarding alleged bullying of Kitching.

Kitching’s widower, Andrew Landeryou, was critical of the treatment of the senator during her time in politics and praised her determination to push through major initiatives on foreign policy and defending Australia against the CCP.

“She was unafraid in all things, unafraid of all foes, and she had big plans,” he said.

“She constantly sought from defence and many sources that we weren’t doing enough to keep the country safe,” he added. “And she was absolutely determined to fix that long before our capability was ever tested in looming conflict.”

Landeryou said Kitching was willing to “endure internal hostility” to shift the needle on big debates citing her work on legislating against Beijing’s Belt and Road Initiative, the Port of Darwin, Magnitsky human rights sanctions, and anti-money laundering.

Kitching had faced internal criticism for her stance on the CCP, even as issues of foreign interference began coming to light.

“She exemplified the courage and creativity that we all say we want from candidates for public office. But on all sides, we too often shun both—favouring useful idiots, obedient nudniks, and bland time servants,” he said. “I am so proud that Kimberly was a shining beacon of what could and what should be in our public life.”

Landeryou said the senator was inspired by the “fiercely anti-communist idealist” Robert Kennedy.

“He once said, ‘Few will have the greatness to bend history itself. But each of us can work to change a small portion of events and in the total of those acts will be written the history of this generation,’” Landeryou said.

He said that Kitching’s political and moral judgement was “vastly superior to the small number” who opposed her internally.

“Of course, there’s a lot I could say about the unpleasantness of a cantankerous cabal … that was aimed at Kimber … But I hope it’s sufficient to say she deserves so very much better. The truth is the vast majority of the Labor family was welcoming,” he said.