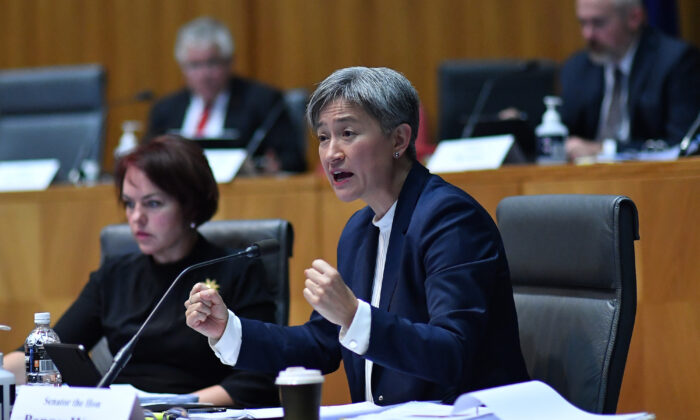 Australian senators Penny Wong, Kristina Keneally, and Katy Gallagher, all from the left-leaning Australian Labor Party (ALP), have denied allegations they bullied their colleague, the late Sen. Kimberly Kitching, up until she died on March 10.

Amid intense scrutiny and criticism, and after dodging questions along with other ALP colleagues, Wong, Keneally, and Gallagher released a joint statement on March 18, just days before Kitching’s funeral.

The senior female senators, who Kitching allegedly referred to as the “mean girls,” said it had been a difficult time for the “Labor family” after their Senate colleagues’ tragic death.

“Our priority at this time has been Senator Kitching’s husband, Andrew, her family, and her loved ones. Their grief is profound, their loss immeasurable.

“Out of respect for them, and for Senator Kitching, we have not responded to allegations that have been made, despite them not being true,” they said in a joint statement.

The senators said that while they wanted to maintain some dignity for Kitching’s family by not responding to the allegations, the nature of them meant they felt it was “necessary to respond.”

“The allegations of bullying are untrue. Other assertions which have been made are similarly inaccurate,” they said.

The senators noted that politics was a “challenging profession” full of “robust” contests and difficult interactions.

“All of its participants at times act or speak in ways that can impact others negatively. We have and do reflect on this, as individuals and as leaders,” they said.

Despite denying the allegations of bullying, Wong confirmed that one reported allegation, that she made an insensitive comment to Kitching about not having children.

Wong’s comments were first reported by the Australian Broadcasting Corporation in 2018, without naming Wong as the culprit.

“After these matters were publicly reported more than two years ago, Senator Wong discussed the matter with Senator Kitching and apologised. Senator Wong understood that apology was accepted.

“The comments that have been reported do not reflect Senator Wong’s views, as those who know her would understand, and she deeply regrets the pain these reports have caused,” they said.

News Corp’s The Australian reported that it was a dear wish of Kitching’s to have children.

Friends and colleagues have spoken both anonymously and on the record about how Kitching was facing increased isolation by the party, given her more conservative leanings on many issues.

Kitching was a member of the Labor Right faction and played a pivotal role in Australia’s implementation of the Magnitsky Act, which gives the government the power to sanction overseas human rights violators. It has been alleged that Wong stole credit for Kitching’s work on the Magnitsky Act.

Kitching reportedly fell out of favour with some in the ALP over her views on climate change and China. She was a member of the Inter-Parliamentary Alliance on China and “The Wolverines,” an influence group of politicians, mostly from the conservative LNP, critical of the Chinese Communist Party (CCP).

A month before she died from a suspected heart attack, Kitching named a Chinese billionaire as the puppeteer behind a foiled plot by the CCP to install Manchurian ALP candidates into parliament.

Kitching had been driving before she was forced to pull over by the side of the road during the medical episode during which she was able to call her husband Andrew Landeryou.

Landeryou and emergency services were unable to treat Kitching who died at the scene.

Wong, Keneally, and Gallagher will attend Kitching’s funeral on Monday, with the family’s blessing, they said.