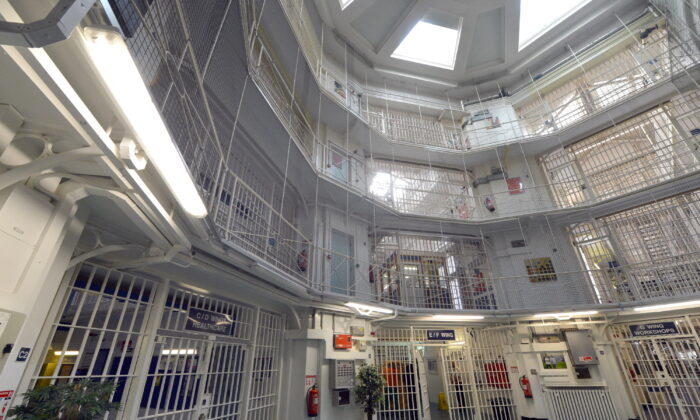 The centre of Pentonville Prison in London, in an undated file photo. (Anthony Devlin/PA)
UK

The new justice secretary, Brandon Lewis, has been implored by striking barristers to negotiate with them over pay as the industrial action delays more trials and increases daily the size of the prison population in England and Wales.

The Howard League for Penal Reform said there are currently more than 81,000 people being held in prisons in England and Wales and at least 12,000 of them are on remand, either awaiting trial or sentencing.

The length of time someone can be detained pending trial is limited but, when the pandemic hit in 2020, the government increased the custody time limits to ease the pressure on both courts and prisons.

Under the Custody Time Limits (Coronavirus) Amendment Regulations the custody time limit of 182 days for indictable-only offences like murder and rape was extended to 238 days.

But custody time limits can be extended beyond by a judge if the defendant or a key witness is ill, or for “some other good and sufficient cause” and if the “prosecution have acted with all due diligence and expedition.”

Last week The Recorder of Bristol, Judge Peter Blair QC, refused to extend custody time limits and granted bail to a defendant, saying “the state has had many months to resolve the current dispute.”

A source close to the criminal bar told The Epoch Times they suspected the government would be forced to extend custody time limits beyond the 238 day limit this autumn if there was no resolution to the barristers’ strike.

The source pointed out that in his resignation letter in July, then-justice minister James Cartlidge said, “We worked intensively through the winter to successfully avoid having to extend custody time limits.”

The chair of the Criminal Bar Association (CBA), Kirsty Brimelow QC, told the Justice Select Committee on Tuesday, “What we are going to see happening, increasingly, is defendants in custody when their custody time limits are finished they will be let out on bail and there may be situations where you have people on the streets who you would rather not have on the streets.”

Brimelow also said they had requested a meeting with former justice secretary Dominic Raab three times and been turned down.

Raab was sacked on Tuesday night by the new Prime Minister Liz Truss, and replaced as justice secretary by Brandon Lewis.

Brimelow urged Lewis to sit down with the CBA and negotiate an end to the dispute.

She said, “Dangerous people on the streets will be delighted by the current political stance towards barristers’ action, which is not only about money but also about having a functioning criminal justice system.”

The Ministry of Justice pointed out that criminal barristers will get a 15 percent rise in legal aid fees for new cases from the end of September, which they said works out at around £7,000 a year for the average barrister.

Brimelow told the Justice Select Committee: “It’s not just about money … but money is going to be a start. It’s always needed. And that’s the start, to get people back in the courts, but it’s not the end because the system also is really creaking.”

“The reason the barristers are also all-out is to just shine a light on this system which we are all working in, which is not working, and is nearly collapsing. So there has to be those long-term reforms brought in urgently,” she said.

The Ministry of Justice says 6,000 court hearings have been disrupted by the dispute, which is over legal aid fees and conditions.

Among the cases adjourned this week over the strike was a plea hearing for David Smith, a 58-year-old security guard at the British Embassy in Berlin who is accused of spying for Russia.

The delay between defendants being charged and tried for murder, which started lengthening after pandemic-related lockdowns shut crown courts, has been exacerbated by the dispute and a retrial in the Ryan Giggs case, which was announced on Wednesday, and will not be able to take place until July 2023.

There are currently 14 people awaiting trial at the Old Bailey for murders allegedly committed in or before August 2021, most of whom have had their custody time limits extended by judges.

Jenna Mitchell, a property developer, has been on remand in custody since July 2021 for the murder of a Malaysian woman, Deborah Chong, in north London.

Her trial is due to take place later this month but might be postponed until next year if the barristers’ strike has not been resolved.

It is not only in England and Wales that the criminal justice system is under strain.

The justice affairs magazine 1919 said the number of people on remand in custody has doubled since April 2020.

It said 2,164 inmates were on remand at the beginning of August, including 303 who were awaiting sentence.

Thomas Ross QC, a Scottish defence advocate, told The Epoch Times, “We don’t have a barristers’ strike in Scotland but there are 40,000 outstanding trials in the whole system and I have trials in my diary for October 2023.”