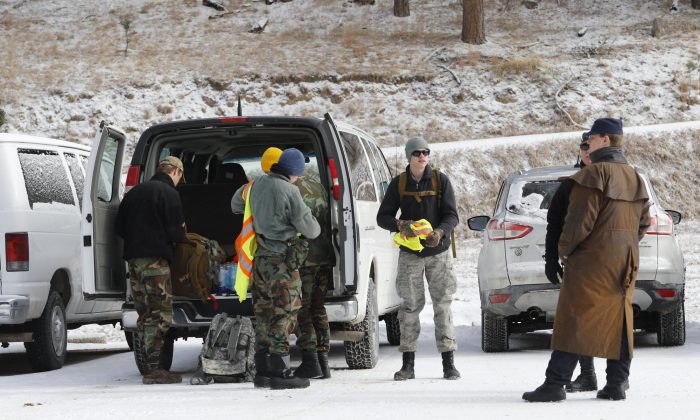 A dog helps search for Serenity Dennard, 9, on Feb. 4, 2019, near Rockerville, S.D. Authorities say that the girl ran away from staff at a residential youth home. (Arielle Zionts/Rapid City Journal via AP)
Crime and Incidents

Authorities say more than 100 people are searching for a 9-year-old girl who ran away from a residential youth home amid frigid weather in South Dakota.

Investigators say the girl wasn’t wearing a coat when she slipped away from the Children’s Home Society on the morning of Feb. 3 near Rapid City. The temperature in the area was about 29 degrees at the time.

Authorities say a couple who saw the girl were able to give investigators a better timeline of events. The search on Tuesday was focused on a 1-mile radius of the facility’s home campus.

Jayme Closs, 13, who was held captive for months after getting kidnapped in October 2018, enjoyed lunch with her grandfather who vowed to buy her steak when she was found.

A picture of Jayme and her grandfather, Robert Naiberg, was posted on Facebook on Feb. 3 showing the pair smiling and enjoying a meal.

It was shared by Jennifer Halvorson, a Closs family friend, through a page she runs called “Light the way home for Jayme” that shared updates during the search for the girl and has kept supporters up to date since she escaped from her captor in January.

“We’re so blessed! Grandpa said since day one he was gonna buy Jayme a big steak when she was found!!” Halvorson wrote. “Well, here it is he bought her steak and they had lunch together at his house!!”

She said she was sharing the picture with the family’s permission.

Jayme has a smile on her face and is holding a fork aloft as her grandfather does the same.

In the first picture shared after Jayme’s escape, she was seen with her dog, Mollie, and her aunt Jennifer Smith.

The moment Jayme was reunited with her family was emotional, as a room full of relatives greeted her.

The family dined on snacks and meat and cheese and showed Jayme to her new room, where she’ll be living with one of her aunts.

“We’re just pretty excited,” Smith, 22, said. “We set up Jayme’s room that day before she got home.”

Jayme was at home in Barron on Oct. 15 when a man, allegedly Jake Patterson, shot her parents dead and abducted the teen, driving her to his cabin in the remote town of Gordon.

He held her there for 88 days until she escaped from under his bed when he went out.

Jayme found a neighbor, Joanne Nutter, a retired social worker who was walking her dog and asked for help.

Nutter took Jayme to the home of Kristin and Peter Kasinskas because her own house was close to that of Patterson.

Officers rushed to the scene and took Jayme away for a medical checkup while information she gave them led to the arrest of Patterson, who was driving in the area. Authorities said he confessed soon after being detained. Patterson is due in court on Feb. 6.

Because she rescued herself, Jayme was given $25,000 in reward money that was donated by Jennie-O Turkey and Hormel Foods while she was missing. Barron County Sheriff Chris Fitzgerald said at a press conference the day after Jayme escaped that she was the hero.

“Jayme was the hero in the case. Jayme was the champion that finally said enough is enough,” he said. “We can’t be more proud of Jayme.”