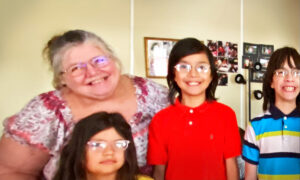 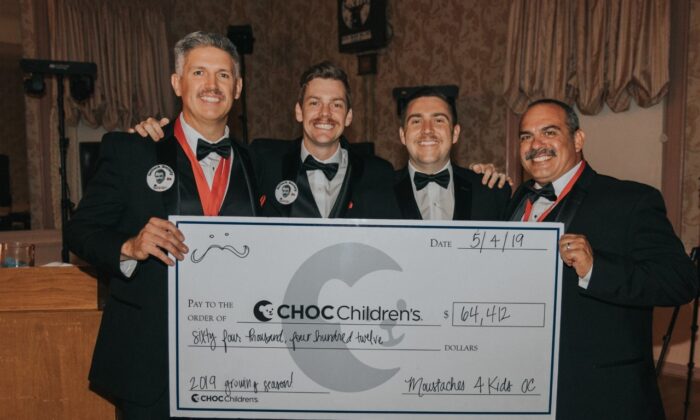 Moustaches for Kids Orange County is about to kick off its 2021 “growing season” as it continues its mission to raise funds, friends, and awareness for local children’s charities.

Each year the nonprofit organization’s members and supporters commit to growing a mustache for 30 days to raise awareness and funds for the chosen charity.

Camp Chinnock helps children with Type 1 diabetes and their families cope with the lifelong disease for which there is currently no cure.

It works with leading hospitals and educational institutions to provide more than 2,500 families from various backgrounds with annual programs and events that help them better understand and manage Type 1 diabetes. Through education, support groups, family retreats, and youth camping programs, children are able to develop life-saving skills and reach a new level of confidence and self-esteem.

Moustaches for Kids OC has a rather unconventional way of choosing a charity each year, but according to Tim Kearns, the organization’s board vice president, it’s what makes the dedicated group of guys (and gals) tick.

“We are not your typical fundraising group,” Kearns told The Epoch Times. “Each year, we have to pick from 12 highly deserving charities, which is never easy. So we decided to conduct interviews via a bake-off that would show us more about the personalities of each. We’re looking for the deeper story than what can be found in a stiff board presentation.”

For the past few years, the charities have been asked to compete in a bake-off and make their presentations at a local brewery rather than an office conference room. Their baked goods are supposed to reflect an element of the charity’s cause, and presenters are encouraged to think outside the standard PowerPoint presentation box.

“It’s really kind of a silly tactic, but it works for us,” said Kearns. “We try to find the core personality of the charity by engaging in fun and creative ways to see if they are a fit for us.”

In turn, Kearns says it makes giving back fun for their “growers,” who don’t necessarily fit the typical philanthropic demographic but are passionate about supporting children’s charities nevertheless.

“We’re not the typical fundraising group, but at the end of the day, why not make the process fun for everyone? It’s really great to see what some of them come up with, and it also makes it that much harder for us to choose—all of the charities that applied could have won.”

On the fundraising end of the campaign, any of the participants who donate $1,000 or more qualify for the organization’s coveted “Selleck Society,” named after actor Tom Selleck and his world-famous mustache.

“We applied last year, but I really had no idea what to expect. I knew they were unconventional, but didn’t really understand what it meant, so I showed up with brochures, and the other charities had pom-poms and such,” Ryan Martz, Camp Chinnock development and program director, told The Epoch Times.

“I was expecting the usual boardroom presentation, not a brewery and a bake-off,” said Martz. “But this year, I think we nailed it with a s’mores cupcake that one of our staff members created. We felt it really reflected the universal campfire favorite that campers love to make during their visit.”

Kearns said that on top of Camp Chinnock’s cupcake, they also liked the fact that many of the kids who finish the program are so impacted by their camp experiences and make so many friends with the same disease that they return to become leaders who go on to help others cope with Type 1 diabetes.

“We never turn any child or family away because of financial reasons,” Martz said. “Being chosen as Moustaches for Kids OC 2021 beneficiary is a godsend since we are still trying to make up for the 2020 pandemic shutdowns.

“The camp means so much to these kids, when they are diagnosed, they feel so isolated and different from their peers, it can be overwhelming. After a diagnosis, a child has to administer a shot anytime they eat and constantly monitor their blood sugar, and that’s for the rest of their lives.”

Martz said he knows how it feels for the kids who come to Camp Chinnock because he was once a camper there himself after he too was diagnosed with Type 1 diabetes as a child.

“I don’t want to get too emotional, but honestly, I can’t tell you what coming to Camp Chinnock did for me growing up,” he said. “I was depressed, frightened, I felt so different than everyone else. But my mom made me go, and thank goodness she did because it completely changed my life.”

Martz said that for their campers, the feeling of being “different” goes out the window when all the kids arrive and are surrounded by others who are going through what they’re going through. Lifelong friends are made, and he said that about 90 percent of campers at some point come back to volunteer or work for the organization.

Moustaches for Kids OC is now accepting applications for the 30-day fundraising challenge, and a “Clean Shave” kickoff party has been scheduled for July 15, at a local brewery to be announced. The month-long campaign is filled with a series of events that culminates with their “Stache Bash” on Aug. 14.