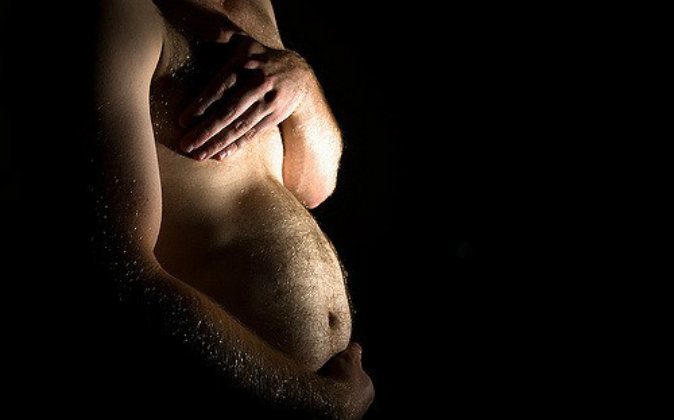 (Mike Murphy/CC BY)
Beyond Science

A Wisconsin woman had tried for five years to become pregnant. One day, her husband woke up feeling nauseous at the smell of breakfast.

He rushed to the bathroom to vomit. He repeated the scene the next morning. Did he have an ulcer? No. She was pregnant.

He was experiencing morning sickness and she was not. His symptoms continued for the next four months while she had none. His symptoms persisted even when he was miles away from her.

Sympathetic pregnancies (couvade) have their basis in parallel physiological responses in the expectant father.

In a study by researchers at Memorial University in Canada, men and women were found to have similar levels of the hormones prolactin and cortisol in the period just before the babies were born.

After the births, the mothers and fathers had lower concentrations of sex steroids (testosterone and estradiol). Men with sympathetic pregnancy symptoms had higher prolactin levels and greater reductions in testosterone.

Since increases in prolactin seem to increase interpersonal bonding, they speculated that these hormone changes played a role in preparing males for bonding with the infant.

There are several psychological theories which seem inadequate. These theories involve the man’s jealousy of the soon-to-arrive baby, his feeling of being displaced and marginalized.

In my view, the man with couvade becomes highly attuned to his pregnant partner. In that attunement, he feels what she is feeling at a depth he did not consciously seek.

I think the attunement is mediated through the energy fields circulating within and around our bodies. With pregnancy, the shift in her energy field is so strong that his attunement gives in to her new vibrational level and equilibrates to it. Physiologically, he becomes more like her.

Theresa Santos reported a practical version of this spousal dance. About one month pregnant, she was living in New York, but was moving with her husband out of country.

“On our last morning in New York, we had a ton of things left to do before leaving for our flight that evening,” she told me. “I particularly needed to do a lot, because there are just some things I take care of better and more efficiently than my husband (cleaning, laundry, some final packing … he’s very organized with packing, but I’m quicker) and a lot of those things needed to be done.

“My husband’s chores for the morning consisted only of going to the mall to pick up a few things, including another suitcase.

“I’d experienced morning sickness almost every day last week and the week before. I’ve usually been really slow in the morning. But, on Sunday, I woke up early and felt really well. I was energetic and efficient, which I haven’t been lately. My husband, instead, was nauseous and fatigued. He seemed to have taken on the morning sickness for me that day.”

She took care of the more demanding tasks symptom-free, while her husband took on the easier chores loaded with morning sickness.

If we understood the mechanisms behind couvade, we might take a step toward explaining simulpathity, the experience of a loved one’s distress at a distance.

Most men do know their partners are pregnant, whereas in most cases of simulpathity, the root of the sympathetic symptoms is unknown at the time.

For example, a woman felt a searing pain in her right hand while writing a letter. She later found out that, at the same time, her daughter burned her right hand in a lab experiment.

Like couvade, this physiological resonance is not done consciously. The big difference, of course, is not only does the husband know she is pregnant but he is living near her. With simulpathity, the resonating pair are away from each other and the experiencer does not know that the other is in distress.

So physical closeness and conscious awareness make couvade different from simulpathity. Yet aside from these two factors, there are many similarities that suggest shared underlying mechanisms.

This article was previously published on Dr. Bernard Beitman’s website. Beitman is a visiting professor at the University of Virginia. He is the former chair of the University of Missouri-Columbia department of psychiatry. See his blog, Connecting With Coincidence, to learn more about Coincidence Studies.