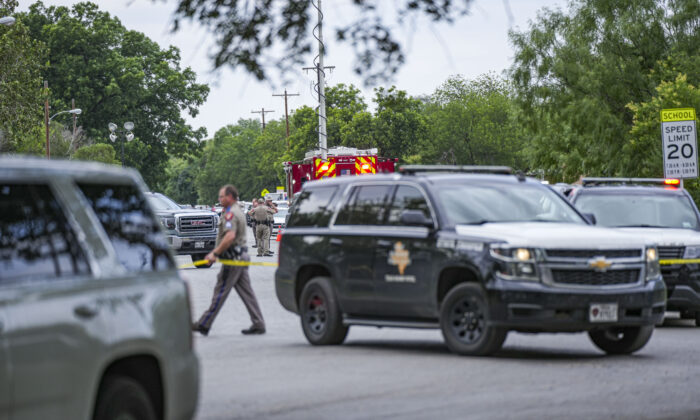 Police cordon off the streets around Robb Elementary School after a mass shooting, in Uvalde, Texas, on May 24, 2022. (Charlotte Cuthbertson/The Epoch Times)
Southern California OC News

COSTA MESA, Calif.—The Costa Mesa Police Department (CMPD) said on May 25 it will increase patrols at all schools in the city through the end of the school year after a Texas elementary school shooting killed 21 earlier this week.

Though Costa Mesa schools have not received any threatening messages, according to CMPD Chief Ron Lawrence, the community requested an increase in police presence and patrols at schools after the Texas shooting.

“As law enforcement officers, who are also parents and family members to young students, we take situations such as what happened in Texas seriously and work to take immediate action in our own community,” Lawrence said in a May 25 statement. “Upon learning of this tragedy, we immediately assigned extra police officers to provide high-visibility patrols to Costa Mesa campuses. … Their presence is a reassurance that they are there to help and keep students safe.”

Mayor John Stephens said in a statement he is committed to working with school districts and the police department to ensure campus safety.

“The senseless loss of innocent lives in Uvalde, Texas, is heartbreaking and tragic,” Stephens said. “While we wait for Congress to take action to address gun violence, the City of Costa Mesa, through our Police Department, is committed to working with the school district to prioritize student safety for the rest of the school year and going forward.”

While increasing campus patrols through the end of the school year is a short-term strategy, City Manager Lori Ann Farrell Harrison said she will work with other city departments to come up with future plans.

“The frequency of these mass shootings is heartbreaking. Schools should be a safe haven for our children to learn and increasingly, they are not. I am committed to working with Mayor Stephens, our City Council, and Police Chief Lawrence on both short-term and long-term solutions to this crisis,” Harrison said.

On May 24, an 18-year-old gunman opened fire at a Robb Elementary School in Uvalde, Texas, killing 19 children and two adults, which prompted schools across the nation to evaluate their campus security measures.

A spokesperson for the Mesa-Newport School District did not respond to a request for comment by press time.