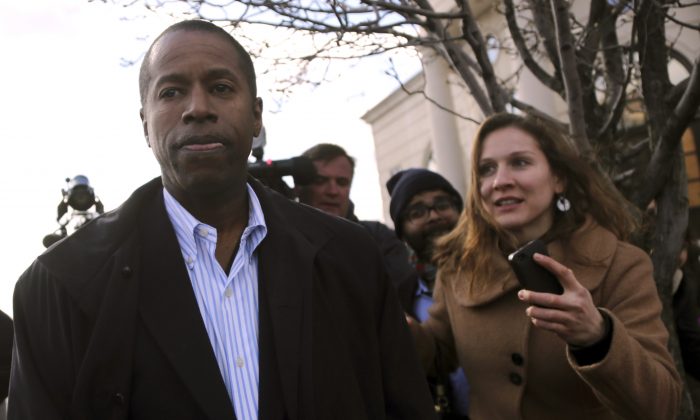 WHITE PLAINS, N.Y.—A state senator accused of trying to bribe his way onto the New York City mayoral ballot said he didn’t do it—and if he did, he was lured into it by federal agents.

Sen. Malcolm Smith’s trial begins in White Plains this week amid his re-election campaign in Queens.

His co-defendants are former City Council member Daniel Halloran, who wants to use an insanity defense, and Vincent Tabone, who was vice chairman of the Queens Republican Party.

Smith, a Democrat, is accused of scheming to bribe the city’s Republican leaders for their approval to run as the GOP candidate in last year’s mayoral race. He needed three of the five county leaders to sign off.

Prosecutors said they have a recording of Halloran saying, “That’s politics, it’s all about how much. Not about whether or will, it’s about how much, and that’s our politicians in New York. They’re all like that.”

Halloran is accused of helping to arrange and negotiate the bribes. Prosecutors said Tabone accepted a bribe.

“Smith drew up the game plan, and Councilman Halloran essentially quarterbacked that drive by finding party chairmen who were wide open to receiving bribes,” Bharara said when the charges were unveiled.

The three defendants have pleaded not guilty. Each faces up to 20 years in prison if convicted.

Court papers have made clear that much of the evidence at the trial will come from about 30 recordings made by an undercover FBI agent known as Raj and a cooperating witness. The witness has been identified as Moses “Mark” Stern, a Rockland County real estate developer. Prosecutors acknowledge that Stern pleaded guilty last year to unspecified federal charges, hoping to win leniency at sentencing.

It’s unclear if Stern will testify. Undercover agents will testify using aliases, and any exhibits that show their faces will be sealed, the judge ruled Friday.

“For nearly a year, an aggressive FBI agent teamed up with a self-confessed fraudster … in an effort to entrap the senator in a criminal plot, a plot the senator never joined,” Shargel said.

Smith faces several opponents in a Democratic primary and had sought to delay the trial until after his campaign, but Judge Kenneth Karas refused.

Halloran’s lawyer, Vinoo Varghese, said last week that he had just learned that Halloran underwent surgery for a brain tumor in 2012. He asked the judge to let him pursue an insanity defense as a result, despite the late notice. Karas expressed skepticism but told the lawyer he could try to convince him in writing.

Outside the courtroom, Varghese would not say how the surgery had affected Halloran.