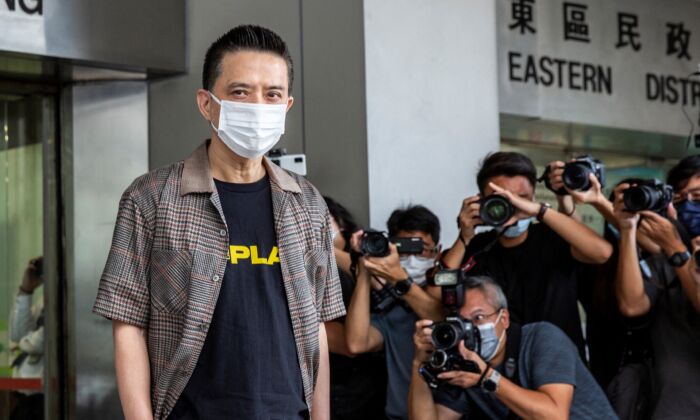 Prosecutors in Hong Kong dropped corruption charges against a prominent pro-democracy singer on Aug. 5, after accusing him of providing entertainment to induce voters in a legislative by-election.

Anthony Wong, a Cantonese pop singer, was asked to pay a guarantee of 2,000 Hong Kong dollars ($257), and was given a binding-over order of 18 months during which he must be on good behavior.

Former lawmaker and pro-democracy activist Au Nok-hin, who Wong supported in 2018 and who won the election, was issued the same order.

“No matter if I am right or wrong, I will bear the result wholeheartedly. Facing everything in the world, no matter what will happen, I will always be the true me,” Wong sang.

Wong and Au’s cases come amid a flurry of legal action against government critics, some of it under the infamous national security law that the Chinese regime imposed on the former British colony last year.

A Charge of ‘Corrupt Conduct’

Wong was arrested on Aug. 2 by Hong Kong’s corruption watchdog, with a “corrupt conduct” charge that Wong performed at legislative by-election rally held by Au on March 3, 2018, which violated the elections ordinance.

Wong sang two songs at the rally and encouraged the attendees to vote for Au. Au promoted the rally in advance, shared the video record of the rally later on social media, and marked them as “campaign advertisements.”

On Aug. 5, the watchdog’s spokesperson said that providing others with refreshments and entertainment at an election event is “corrupt conduct and a serious offense.” Prosecutors said they were dropping the charges against Wong and Au in consideration of their attitudes to the charges because Wong sang only two songs.

Au, who has been behind bars since March, is one of 47 activists arrested earlier this year under the territory’s tough national security law over an unofficial primary held last year that authorities say was a subversive plot to paralyze the government.

Since its enactment, prominent democrats have been arrested, while some others have fled overseas.

Book publishers have admitted to self-censoring, cinemas have pulled “Inside the Red Brick Wall”—a documentary about Hongkongers’ pro-democracy protests in November 2019, and the contemporary art M+ museum was threatened that the national security police could vet its politically-sensitive collections.

Popular pro-democracy tabloid Apple Daily closed in June after its senior editors were arrested, several hundred police raided its headquarters, and key assets and bank accounts were frozen. Online outlet Initium Media announced on Aug. 3 that its headquarters would move from Hong Kong to Singapore due to fading press freedoms.

This week, artist Kacey Wong moved to Taiwan. He told London-headquartered The Art Newspaper on Wednesday that it is “too dangerous to stay” in Hong Kong as the Chinese regime curbs artistic and editorial autonomy.

Wong, 59, rose to fame in the 1980s. He became an outspoken supporter of the city’s democracy movement, backing the 2019 pro-democracy protests as well as the so-called Umbrella Revolution rallies in 2014.

His support for the 2014 protests led to a ban on performing in mainland China and the removal of his music from streaming sites.

AP and Reuters contributed to this report.