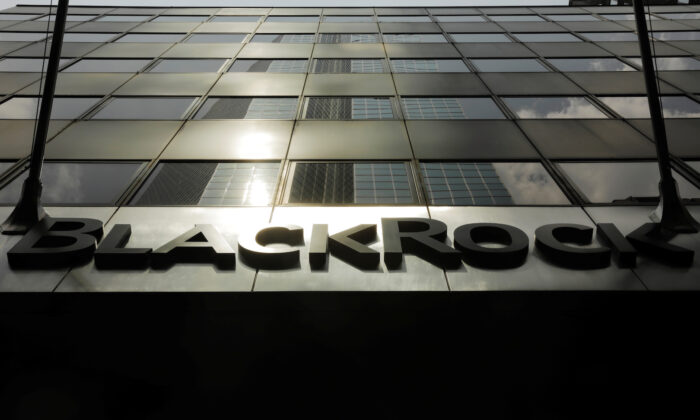 A sign for BlackRock Inc. hangs above their building in New York on July 16, 2018. (Lucas Jackson/Reuters)
By Bryan Jung

Consumers’ Research, the oldest U.S. consumer advocacy organization, sent a letter (pdf) on Dec. 2 to 10 state governors warning them about the reliance of their states’ pension funds on BlackRock’s strong ties to China.

Washington has the largest portfolio risk, with $13 billion of its state pension fund invested in BlackRock, the largest asset manager in the world.

The letter, coming after the findings in the 2021 U.S.–China Economic and Security Review Commission Report to Congress, was sent to “raise awareness among American consumers that BlackRock is taking their money and betting on China,” according to Hild.

“In so doing they are putting American security at risk, along with billions of dollars from U.S. investors,” the letter reads. “BlackRock’s unabashed gusto for Chinese markets flies in the face of concerns about China’s ascendant standing in the world, its authoritarian model of government, and its ambitions to supplant the U.S. as the pre-eminent world power.”

Fink, who has a cozy relationship with the regime and has been labeled a “trusted partner” by the Chinese Communist Party (CCP), has been acting as one of their top foreign economic advisers since the early 2000s. In a March 2020 letter to shareholders, Fink said he continues “to firmly believe China will be one of the biggest opportunities for BlackRock over the long term, both for asset managers and investors,” the Wall Street Journal reported.

Hild has accused Fink of “choosing China over America,” by acting against the interests of his own shareholders and the security of his own nation.

“What we’ve seen is that while BlackRock is virtue signaling in the United States, they’re aiding our adversaries with American pension dollars,” Hild said in comments not included in the letter. “We cannot let executives like Larry Fink try and tell Americans how to live while simultaneously cozying up to one of the world’s leading human rights abusers.”

Just before the 2018 U.S.–China trade talks with the Trump administration, Fink publicly met with and advised Chinese Vice Premier Liu He.

Hild also warned in the letter that “investment in Chinese companies could also make U.S. investors unwitting accomplices in the expansion of the CCP’s surveillance and intelligence gathering apparatus, or worse yet, make them party to human rights abuses like the ongoing genocide against Uyghurs in Xinjiang, China.”

BlackRock has continued to double down on its investments in communist China, despite the warnings from Congress and other major investors.

Hild urged the governors to “do their due diligence in educating themselves and their staff on the multiple risks posed by BlackRock’s extensive investments in Chinese companies, both from an ethical standpoint as well as the fiduciary responsibility owed to U.S. pension holders and retirees.” He also said they must seriously take action when it comes to the security of their state’s funds.

Representatives for BlackRock didn’t respond to a request for comment by press time.