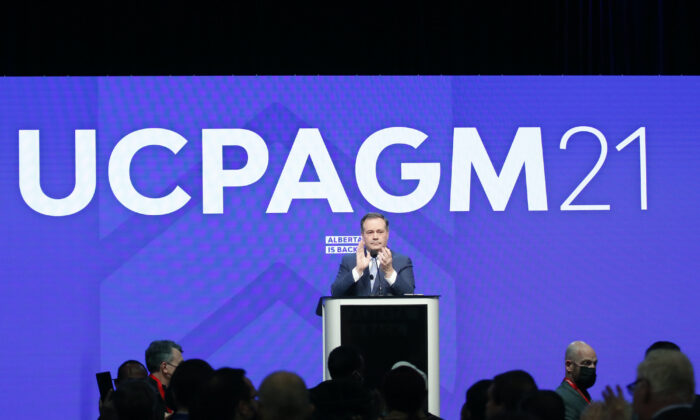 Conservative party members are unforgiving when they lose elections. Former leader Andrew Scheer didn’t even last three months after the 2019 federal election before he was pressured into resigning. Scheer’s term as leader lasted a little over three years.

Erin O’Toole is now fighting for his political life as party members demand a leadership review. Saskatchewan Sen. Denise Batters, who was among those calling for a review, was kicked out of the national caucus by O’Toole. The Senate Tories, however, kept her in their caucus.

Winning elections doesn’t ensure stability for conservative leaders either. In Alberta, not a single Tory leader has managed to last more than one election at the helm of their party since Ralph Klein resigned in 2006.

Former Progressive Conservative premiers Ed Stelmach and Alison Redford both won strong majority governments, yet both were pulled from power by their own members. Former Harper government cabinet minister and Alberta Premier Jim Prentice resigned on the night of the 2015 Alberta provincial election when he suffered a defeat to Rachel Notley’s NDP, thus sparing himself the fate of being removed by his own members.

Premier Jason Kenney is hoping to buck the Alberta trend, but it isn’t looking very good for him. Kenney’s United Conservative Party (UCP) caucus has been in open revolt and hardly a week goes by where one isn’t calling for his head. Kenney ejected two caucus members who questioned his leadership this year. Since then, more caucus members have demanded a leadership review and Kenney doesn’t have the political capital left to expel them.

A general election is expected in Alberta in the spring of 2023. I attended the UCP annual general meeting this weekend and the atmosphere was tense. At a gathering where one would expect optimism and unity as a party prepares for re-election, what I experienced was tension and division.

Kenney supporters desperately pursued a motion designed to dodge a leadership review and the gathered members quashed it. Meanwhile, Kenney’s rival Brian Jean, former leader of the Wildrose Party, was openly campaigning for the leadership in the hallways of the convention centre while members speculated among each other on who the next leader of the UCP will be.

The leadership race to replace Jason Kenney is already underway and the only person who won’t accept that is Kenney himself. If this drags out much longer, the party will be torn to tatters from within.

So what is it with conservatives that causes them to self-destruct like this lately?

Conservatives have evolved in the last few decades. Social issues and religious undertones once kept a sense of unity among conservative partisans. With a more secular world and fewer social issues to contend with, the next generation of conservatives has been of a more libertarian bent.

Unfortunately, there is no group less inclined to sit comfortably under central leadership than libertarians. Libertarians tend to be prickly, ideological, and will always chafe when told what to do. I know this because I am one. It takes a lot of effort to overcome one’s own nature and stay quietly united under a leader you don’t like.

Progressives naturally are inclined to be led. They are collectivists rather than individualists. While they may grumble about their party leadership from within, they will keep it to themselves. This is why we so rarely see progressive parties tearing themselves apart as conservative parties do. The Green Party did recently demonstrate a capability to implode, however.

The ability and charm of conservative party leaders are going to be more important than the policies they espouse. The days of dry policy wonks at the helm are gone. While there have always been policy differences among party members in the past, we have never seen such a proclivity for supporters to storm out of the room when they don’t get their way.

Tory leaders will have to be able to project strength of character effectively enough to keep fractious supporters under one roof. These kinds of leaders are unfortunately few and far between.