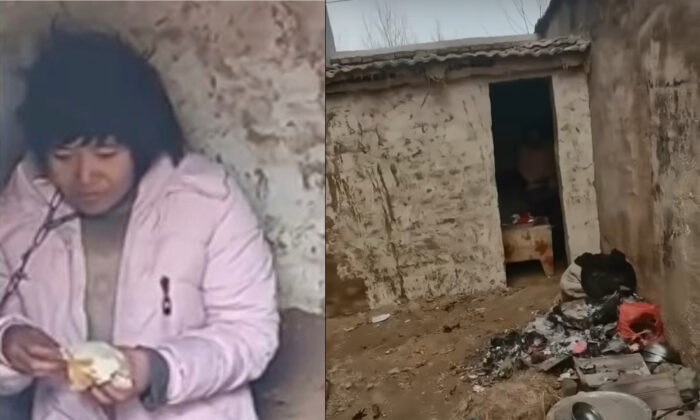 Video screenshot of a mother of eight (L) shackled in a rural hut in Xuzhou city, Jiangsu, China, in January 2022. (Screenshots via Douyin)
China Human Rights

Conflicting statements by authorities have failed to abate a snowballing outcry on the Chinese internet about the treatment of a mentally-ill mother of eight who was videotaped shackled in a hut with a chain around her neck.

Days before the start of the Beijing Winter Olympics, a video of a woman living in spine-chilling conditions appeared almost ubiquitously on the newsfeed of Chinese internet users. The video shows the woman, whose husband named her Yang, wearing light layers of clothing in near-freezing temperatures and chained to the wall in a small rural hut in Fengxian county, Xuzhou city.

From Hero to Criminal

The original viral video on Douyin, China’s TikTok, belonged to the account of Yang’s husband and portrayed his life with eight kids. The instant video platform promoted the video as one that brings about “positive energy,” and comments lauded the father’s alignment with the Chinese regime’s latest policies incentivizing birth.

However, the attention quickly became scathing accusations when netizens noticed the lock and chain around the mother’s neck. Users on the Chinese web demanded answers from authorities.

Some questioned whether Yang’s neighbors and the county officials were part of the human trafficking operations, citing that they are likely aware of the woman’s condition given the pervasive enforcement of China’s one-child policy.

In a Jan. 28 statement, the Fengxian county denied speculations that Yang was trafficked, claiming Yang legally married Dong in 1998. It added that “Yang has violent tendencies and often hit her family without reason” and “has been given treatment.”

However, this statement resulted in spiraling internet outrage, as Chinese law forbids marriage involving mentally disabled persons. Commentators suggested that the husband would have committed rape and abuse over 20 years if the statements were factual. Some suspected the husband used the woman as a “tool for conceiving children.” Others were quick to note that her mental illness could be attributed to abuse by the husband.

Two days later, the county said in another statement reaffirming that public security officials had not found evidence of human trafficking when looking into her case. It further added that Yang was only “momentarily schizophrenic,” to which “medical experts have recommended that she be restrained when displaying symptoms.”

To concerned netizens, this did not absolve the villagers and the grassroots in Fengxian county.

Despite active censorship, the topic had been viewed more than 2 billion times on Weibo by Feb. 7. Most engagements on the social posts were critical of the regime’s handling of the situation and the lack of transparency.

Han Song,  a director at the Xinhua News Agency, said in a social post on Feb. 6 that he neither cares about Bing Dwen Dwen, the official mascot of the 2022 Winter Olympics nor the Chinese propaganda film ‘Watergate Bridge,” but rather Yang’s case. His post disappeared two hours later.

In a Feb. 10 post, Xuzhou’s official social media account announced that Yang—whose original name was found to be Xiao Hua Mei—is a victim of trafficking.

According to Jessie Mou, senior human rights researcher, Yang’s case is representative of a much more prevalent, systemic crime in China that is enabled by the Chinese Communist Party (CCP) authorities.

“There were a lot of similar cases of trafficking of women. In the 1980s, there were 48,100 women who were trafficked in Xuzhou,” Mou told the Epoch Times on Feb. 7, citing data from the book “Ancient Sins” by Chinese authors Xie Zhihong and Jia Lusheng.

“But I have to say in all the cases, not just that local officials have become accomplices, but rather [it is] a kind of systemic and customary crime that has long existed in rural areas of China,” Mou added.

Chen Jiangang, human rights lawyer and visiting scholar at the American University Washington College of Law, commented that the trafficking of women and children goes hand in hand with the local administrator’s authentication of the victim’s identity.

“In over twenty years, [the woman] was illegally kidnapped, imprisoned, shackled … Without the local authorities conniving, or even participating in it themselves, criminal behavior of this kind could not have been sustained,” he told the Chinese edition of the Epoch Times on Feb. 7.

Under CCP rule, China is “hell in the human world,” Chen said.