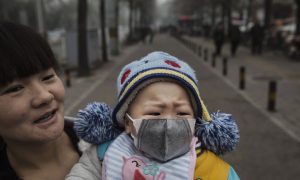 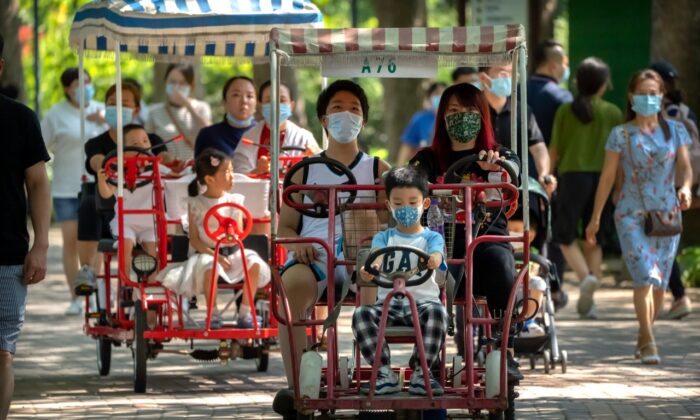 Adults and children ride pedal cycles at a public park in Beijing on Aug. 21, 2021. China will now allow couples to have a third child as the country seeks to hold off a demographic crisis that threatens its hopes of increased prosperity and global influence. (AP Photo/Mark Schiefelbein)
Chinese Regime

The Chinese regime has officially written its new three-child policy into law, marking Beijing’s latest attempt to boost population and avert a demographic crisis that could dash its plans for building global dominance.

The National People’s Congress, the regime’s rubber-stamp legislature, on Aug. 20 amended the Population and Family Planning Law that has for decades allowed the ruling Chinese Communist Party (CCP) to dictate the size of families nationwide.

The change came after a shift to a two-child policy in 2016 failed to revive the country’s falling birthrate.

In 1979, the CCP began a birth planning program that strictly limited most couples to just one child. Known as the one-child policy, it was enforced with hefty fines, job loss, detentions, beatings, forced sterilizations, and forced abortions.

Chinese officials and state media had touted the policy’s success in preventing 400 million births over three decades in the world’s most populous country, claiming it had helped conserve natural resources, drive economic growth, and that it served “valuable lessons” for the world.

The regime relaxed the policy in 2016 by allowing two children per family as it struggled to cope with a plummeting birthrate, an aging population, and a shrinking workforce. A preference for sons also led Chinese parents to abort or abandon baby girls, causing one of the biggest gender imbalances in the world.

The legacy of the repressive policy has continued to haunt China. Statistics from 2020 showed that 12 million babies were born last year, down by 18 percent from 2019’s 14.6 million, making it the lowest since the regime took control of China in 1949.

As many as 264 million Chinese are more than 60 years old, accounting for nearly one-fifth of the country’s total population in 2020, marking a 5.44 percent increase compared to a decade ago. China’s labor force, those between 16 and 59, fell by 40 million over the same period.

The new policy on Aug. 20 eliminated a “social maintenance fee,” a steep fine levied on parents for having extra children, which, in some areas, could represent up to 10 times an average citizen’s annual salary. It also called for additional child care resources such as children’s zones in neighborhood compounds, and parental leave.

The ratings company Moody’s Investors Service, following Beijing’s initial announcement of the new policy in late May, said that while the reform “could support fertility, it is unlikely to dramatically change the national birthrate.”

China’s marriage rate has also been falling in recent years, which authorities have chiefly attributed to the one-child policy. Data from the Ministry of Civil Affairs show that the number of marriage applications has been falling for seven consecutive years, while the divorce rate has been on the rise.

A 2020 report from China Development Research Foundation, a think tank subordinate to the country’s cabinet-like State Council, projected China’s population to decline within a decade. It predicted that 500 million people would reach the age of 60 by 2050, which would make up more than one-third of the Chinese population.

The flagging population growth could also challenge Beijing’s ambition to achieve long-term economic growth, according to a February analysis by Capital Economics, an economics research consultancy based in London. It said an aging workforce may drag on the country’s economy, hampering the regime’s ambition to overtake the United States as the world’s leading economic power.