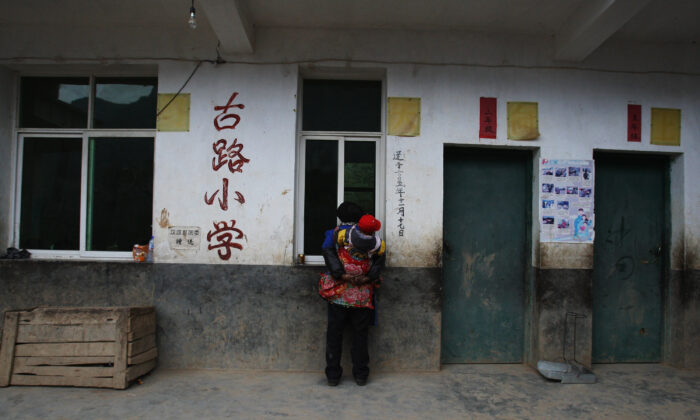 A Yi ethnic elderly woman watches students taking part in a lesson at the school in the village of Gulucan on Nov. 17, 2008 in Hanyuan county, Sichuan province, China. (Guang Niu/Getty Images)
Social Issues

A video that shows a mentally ill Chinese mother of eight children locked in a village shack and chained by her neck has ignited outrage in the country.

The footage, posted last week on Douyin, China’s version of TikTok, shows the woman wearing a light layer of clothing amid freezing winter temperatures. A man visiting her then gives her a warm jacket and some food and asks her some questions; she nods or shakes her head in response, but her answers are slurred and barely comprehensible.

The viral video has stirred anger on Chinese social media, with many netizens demanding that authorities step in to help the woman. The outcry promoted Twitter-like Weibo to temporarily remove the hashtag #MotherOfEight from popular search results to downplay negative comments.

It also has prompted heated speculation that the woman is a victim of human trafficking and forced marriage.

“This is trafficking, rape, and captivity,” a netizen wrote on Weibo on Jan. 28.

However, the woman’s husband and local officials have denied the claim, saying that she is mentally ill, which has caused her to be violent toward her children.

Local authorities in the city of Xuzhou, in Jiangsu Province, issued a short notice on Jan. 28 saying that the woman, whose surname is Yang, married her husband in 1998, and noted that she isn’t a victim of human trafficking. It said the woman was diagnosed with mental illness and has received treatment.

But the official response only prompted a further outcry, with netizens criticizing officials for not addressing the woman’s treatment nor her general welfare. Many questioned whether she had consented to bear eight children, with one netizen suggesting that she had been exploited as a “baby-making machine.”

Decades of the Chinese Communist Party’s one-child policy have resulted in a shortage of women—there are nearly 34 million more men than women in the nation of 1.4 billion people—because of traditional views that favor male children. That has spawned a bride-trafficking industry.

A 2019 investigation by Human Rights Watch discovered a bride trafficking network from northern Burma (also known as Myanmar) into China. It found that Burmese women and girls were tricked by brokers and sold for about $3,000 to $13,000 to Chinese families.

Once purchased, the females were held prisoner and pressured to produce babies as quickly as possible, the group said.

“This is clearly a crime—suspected trafficking of women … and the use of women as sex and fertility slaves,” a blogger named Financial Lady Yingying, with more than 1 million followers, wrote on Jan. 29.

In separate videos posted on social media last year, the woman’s 56-year-old husband, Dong Zhimin, boasts about having eight children, seven of whom are boys.

In one video, Dong said he married after feeling social pressure as a result of his single status in his early 30s.

“[Villagers] looked down upon me,” he told a vlogger.

According to locals, Yang came into Dong’s family as a well-educated student and could speak English, which is rare in the area, Chinese media reported.

In response to the growing controversy, Chinese authorities released a longer statement on Jan. 30 with additional information about the family.

According to the statement, Dong’s father initially took in Yang in 1998 after he found her begging on the street. When Yang and Dong registered their marriage, local officials “did not strictly verify their identity information,” it added.

Over time, Yang showed signs of mental disability, but she could still take care of herself, the statement said. Dong began locking Yang up in mid-2021 when her condition worsened, it added.

Officials added that they are now investigating Dong for his actions.

Yang, who has been hospitalized for treatment, was recently diagnosed with schizophrenia, officials said, adding that her children had been taken into state care.

However, netizens were not placated, with some saying that such actions were too little, too late.

Mary Hong and Li Jing contributed to this report.