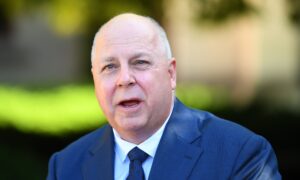 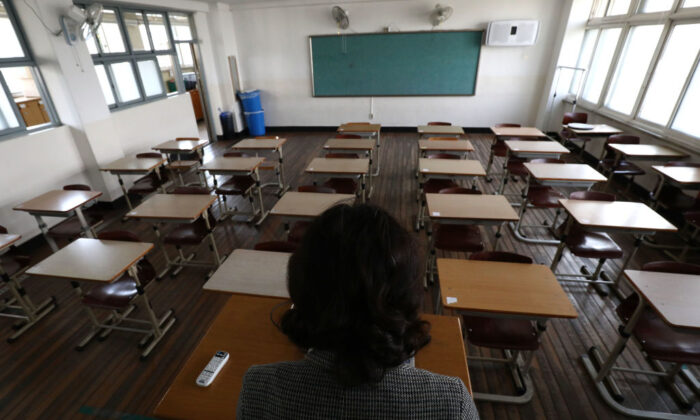 A teacher gives a lesson on the first day of online class in an empty classroom at Seoul Girls High School on April 9, 2020, in Seoul, South Korea. (Chung Sung-Jun/Getty Images)
Australia

The mental health of Victorian children and teens, a low-risk age group for COVID-19, is suffering after being forced into the fourth lockdown in 12 months, with attempted self-harm and suicide rates surging.

Kids Helpline, a national 24/7 confidential support and counselling service for 5 to 25-year-olds, revealed that the attempted suicide rate of Victorian teenagers shot up by 184 percent in the past six months.

Calls for help from primary school children as young as five also rose drastically by 80 percent during the 12 months to March compared to the previous year (pdf).

Victorian schools have been closed for a total of more than 22 weeks, around half a school year, compared to schools closures in South Australia for one week and NSW for around one month.

Many young people are consuming more social media during lockdowns, where they cannot spend time outside. However, some research has shown that social media could not substitute real-life connections despite being able to connect easily with friends online.

A UK study found that heavy social media use was associated with worse scores for self-esteem and wellbeing for teenagers, and the onset of the pandemic only increased their mental wellbeing.

“Regardless of a young person’s pre-existing emotional health status, heavy social media use and low levels of physical activity are linked to worse wellbeing and self-esteem as young people get older,” the report said.

A poll conducted by The Royal Children’s Hospital Melbourne in February also found that the top three concerns parents had for their children related to the internet. More than 90 percent of parents felt that their children were spending excessive amounts of time on a device and that it was a big problem.

Treasurer Josh Frydenberg wrote in an op-ed in the Herald Sun that closures of schools should only be used as a last resort.

“Closing schools is seeing many kids fall behind in their learning,” Frydenberg said. “But it’s going to be the mental health impacts that are more difficult to deal with.”

The Victorian government has voted to pass a new mental health tax law, where businesses that pay more than $10 million in wages nationally will pay an additional tax of 0.5 percent.

The tax was a recommendation by the state’s mental health royal commission, which found that the system was failing patients and required a complete rebuild.

“Making sure we’re looking after Victorians’ mental health makes sense on a very personal level, but also on an economic level, too,” State Treasurer Tim Pallas said. “This measure will save billions for our economy—and most importantly, save lives.”