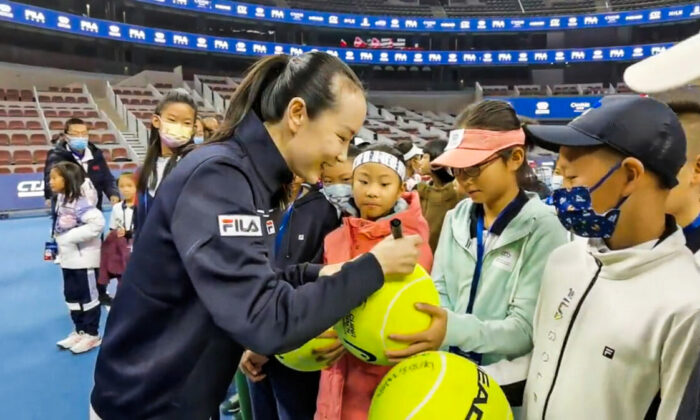 The Chinese regime attempted to dismiss global concerns about Chinese tennis star Peng Shuai over the weekend, when state-run media released photos and videos of the athlete. The effort, however, hasn’t convinced those concerned about Peng’s whereabouts and well-being.

The 35-year-old Peng, who was once ranked No. 1 in doubles by the Women’s Tennis Association (WTA), disappeared from public view after making allegations of sexual assault against a retired high-ranking Chinese Communist Party (CCP) official on Nov. 2. She accused Zhang Gaoli, who was the communist regime’s vice premier from 2013 to 2018, of coercing her into sex at his home several years ago. Later, Peng alleged the two had an on-and-off consensual relationship.

Her online post accusing Zhang was up for about 30 minutes before it was removed by China’s censors. Since then, her disappearance has drawn international concern, with the hashtag #WhereIsPengShuai trending on Twitter. The United Nations and the White House expressed concern on Nov. 19.

Peng’s case highlights the Chinese regime’s continued practice of forced disappearances, in which victims are held at secret locations with their families unaware of their whereabouts. The Chinese regime deploys the practice to silence dissent in favor of so-called social stability under its one-party rule.

On Nov. 21, Peng could be seen standing among other dignitaries at the Fila Kids Junior Tennis Challenger Finals, a youth tournament organized by China Open, according to photos published on the event’s official Twitter-like Weibo page. Peng is dressed in a dark blue jacket and white pants.

China’s state-run media also uploaded clips of Peng to Twitter. In one clip, Peng can be seen at the tournament signing oversized tennis balls held by children, before joining them in a group photo.

A day earlier, Hu Xijin, the chief editor of the hawkish state-run media Global Times, wrote on Twitter that he had “acquired” two video clips of Peng, without elaborating. Hu wrote that the clips “show Peng Shuai was having dinner with her coach and friends in a restaurant.”

However, the content in both clips appears to intentionally emphasize the date of filming.

In the first clip, Peng’s coach asks, “Isn’t tomorrow Nov. 20?” Peng doesn’t respond but a woman sitting next to her corrects the man and says it will be Nov. 21. The man then repeats Nov. 21 twice.

In the second clip, a woman wearing a hat and a mask, presumably Peng, walks into a restaurant. The camera shows a sign on the restaurant window, indicating that the place has been disinfected against the CCP virus. However, only the month, November, is visible, while the rest of the date is blurred.

“Unless and until Peng Shuai herself appears and is clearly speaking freely, any other communications should be treated with skepticism—especially when they are coming from Chinese state media,” Worden wrote.

Steve Simon, chairman and chief executive officer of the WTA, said video clips showing Peng at the restaurant were “insufficient” to dispel concerns, according to a statement.

“While it is positive to see her, it remains unclear if she is free and able to make decisions and take actions on her own, without coercion or external interference,” he said.

“I remain concerned about Peng Shuai’s health and safety and that the allegation of sexual assault is being censored and swept under the rug.”

A spokesperson for the WTA told Reuters that photos and video clips of Peng at the tennis tournament on Nov. 21 remain “insufficient” to address the association’s concerns.

Simon has previously warned that the WTA is willing to pull its business out of China over Peng’s safety.

Some U.S. lawmakers have said that Peng’s case is another reason why the Chinese regime shouldn’t host the 2022 Winter Olympic Games, which begin on Feb. 4 next year.

“Peng Shuai’s disappearance is just the latest in a long list of immoral and inhumane actions committed by the Chinese Communist Party,” Sen. Marco Rubio (R-Fla.) wrote in a statement on Nov. 18. He said it’s time for the International Olympic Committee to relocate the Games.

Rep. Ami Bera (D-Calif.), chairman of the House Foreign Affairs Subcommittee on Asia, wrote in a statement on Nov. 19 that “there must also be a formal and independent investigation into Peng’s accusations of sexual abuse.”

“The world cannot stand idly by as the CCP continues to commit egregious human rights atrocities and violate basic freedoms,” Bera wrote. “That’s why I strongly urge the Biden Administration to implement a diplomatic boycott of the 2022 Beijing Olympics.”