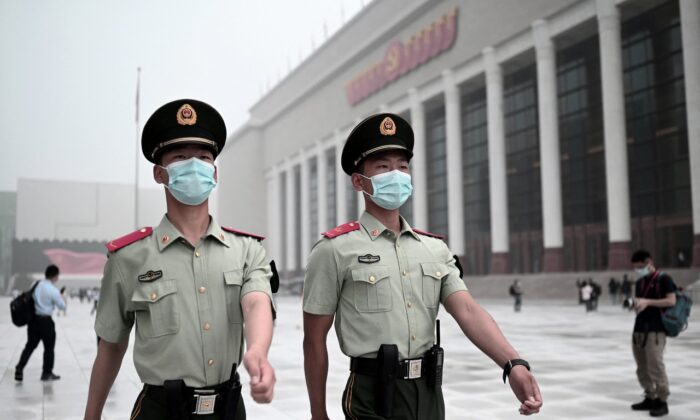 Paramilitary police walk outside the Museum of the Chinese Communist Party near the Bird's Nest national stadium in Beijing on June 25, 2021. (Noel Celis/AFP via Getty Images)
Thinking About China

Communist China Declared War on the US Long Ago: Part 3

Part 3 of the 3-part series: The CCP's War on America

So far—and thanks to relentless coordinated propaganda by Chinese diplomats and state-run Chinese media—the Chinese Communist Party (CCP) has not completely lost control of the COVID-19 narrative, including success in delinking the virus itself from its human-engineered origins in Hubei Province.

Co-opted Westerners and others still champion the theory of a “natural” jumping of the virus from bat (not pangolin) to human, but scientific and other evidence has been shooting a lot of holes in that theory lately. Americans are also finally waking up just a little bit to the Chinese People’s Liberation Army’s (PLA) intimidation of Taiwan, India, the Philippines, Japan, and others.

But the dots of Chinese belligerence need to be fully connected, as communist China has been engaged in the three threes of warfare against the United States and the rest of the world for years.

Parts one and two of this series have covered the first six of those warfares. This part concludes the series with a discussion of the remaining three warfares being conducted by the CCP.

Financial warfare being conducted by the CCP against the West is closely related to economic warfare. Despite the best intentions of Westerners who were hoping for more when China was “opened” in 1972, China remains mercantilist to the core, having manipulated its currency since the country was “opened” by former President Richard Nixon and former Secretary of State Henry Kissinger in 1971.

China’s economy is opaque, Byzantine, and authoritarian capitalist, and the Chinese yuan is the very definition of a fiat currency that is manipulated through devaluation when deemed necessary for economic advantage by the CCP. The Chinese communists (Chicoms) seek to challenge the U.S. dollar as the key international currency underlying the world trade system, and eventually supplant it with the Chinese yuan as the world’s primary reserve currency. The yuan has already achieved official reserve-currency status from the International Monetary Fund, but for now “the yuan’s share in global payments and central bank reserves remains low, at about 2%,” according to Bloomberg.

The key to displacing the dollar is convertibility of the yuan. If/when the yuan achieves full convertibility, then Chinese overseas investments under the Belt and Road Initiative (BRI) can be flexibly implemented, and China can nudge other countries away from the dollar and toward the yuan. Also, the convertibility of the yuan and an accompanying digital exchange and payment capability with the Chinese central bank would enable the Chicoms to extend their financial empire worldwide. The aim would be to decouple Western companies and banks from global capital markets and money flows, making it easier for the yuan to prevail as the top world reserve currency.

Another key financial warfare objective is to entice Western capital and financial institutions to China. Hong Kong—long a banking and financial capital of the world—has already been absorbed into communist China, and the CCP has a long-standing goal to make Shanghai the world’s top global financial center for both prestige and financial control purposes.

The CCP has long been engaged in cyber warfare against the United States. According to the U.S. Department of Homeland Security’s Cybersecurity and Infrastructure Security Agency (CISA): “Malicious cyber activities attributed to the Chinese government targeted, and continue to target, a variety of industries and organizations in the United States, including healthcare, financial services, defense industrial base, energy, government facilities, chemical, critical manufacturing (including automotive and aerospace), communications, IT (including managed service providers), international trade, education, video gaming, faith-based organizations, and law firms.”

Most Chinese cyber operations, which consist of economic espionage against U.S. private industry that have been detected, are focused on cleared defense contractors or IT, and communications firms whose products and services support government and private sector networks worldwide.

In one example, members of “Advanced Persistent Threat 10, or APT 10, a hacking group associated with the Chinese government,” were indicted in 2018 for “conspiracy to commit computer intrusion, conspiracy to commit wire fraud, and aggravated identity theft,” according to the FBI.

In another example, links have been found between Chinese cyber actors and a back door in the popular CCleaner application that allowed the actors to target U.S. companies, including Google, Microsoft, Intel, and VMware. And Chinese cyber attacks continue, as a recent report by the cybersecurity firm Palo Alto Networks stated, “In the U.S. alone, hundreds of organizations were targeted by hackers as part of an espionage effort that took place between late September and early October.”

Finally, a Nov. 22 report from the Congressional Research Service listed a number of Chinese cyber attacks against U.S. entities over the past decade.

These are just the tip of the iceberg of ongoing CCP-directed cyber warfare against the United States.

Is the COVID-19 pandemic actually CCP biowarfare in practice?

The PLA has been conducting biological warfare research for decades. Since the Chinese were themselves victimized by Japanese biological warfare in World War II, it is no surprise that they began research into the development of bioweapons, as well. It is alleged that the Wuhan National Biosafety Laboratory is just a cover for the research and development of Chinese bioweapons being conducted under the direction of the PLA. There have been open-source signs of the results of that research—as well as its purpose—for several years.

The PLA has long-held plans to use bioweapons in a future conflict, according to a May 2021 news report: “Chinese scientists have been preparing for a Third World War fought with biological and genetic weapons including coronavirus for the last six years.”

A novel coronavirus research report from 2015 declared: “Researchers inserted a protein from a Chinese rufous horseshoe bat into a SARS virus from 2002–resulting in a new pathogen which could infect human cells.”

The Smithsonian Magazine published an article about the bird flu in 2017 that is almost a precursor of the spread of the SARS-CoV-2 virus. The article was titled, “Is China the Ground Zero for a Future Pandemic?” And this is the money quote (emphasis added): “Western experts say Chinese officials have come a long way since their wobbly handling of the 2002 outbreak of SARS, the severe respiratory disease caused by a previously unknown coronavirus; Chinese apparatchiks initially tried to cover up the epidemic, creating a worldwide scandal.”

Since its appearance in China’s Hubei Province in late 2019, there has been much speculation in open sources about the specific origin of the SAR-CoV-2 virus, with the two main theories being a zoonotic event (animal-to-human) or a bio-engineered virus deliberately created in a laboratory.

In June 2021, The Wall Street Journal reported that the CGG-CGG amino acid sequence found in the virus is manmade and can only have been inserted through gain-of-function research, as the CGG-CGG sequence is not found in nature.

Whether purposely or inadvertently released, the CCP has exploited the virus by sowing fear that draconian lockdown measures are “justified,” it withheld details on the virus genome that could have facilitated a much better medical response, and exploited the lockdowns around the world for crass economic advantage.

Capability, intentions, a past cover-up, illegal smuggling of bio-agents into the United States, scientific evidence pointing to a human-engineered virus in a laboratory run by the PLA, and purposeful exploitation—all of this points directly to biowarfare being conducted by the CCP against the United States and the world.

Xi Jinping is leading the CCP in the three threes of warfare against the United States and the world with a goal of achieving global supremacy and world leadership by the Party’s centenary celebration in 2049. Nine avenues of ongoing CCP warfare were summarized in this three-part series. The evidence is overwhelming that the CCP is at war with the United States on multiple fronts. Will the luck of the threes prevail for Xi and the CCP, or will the United States finally awaken to the total threat posed by the Chinese regime?